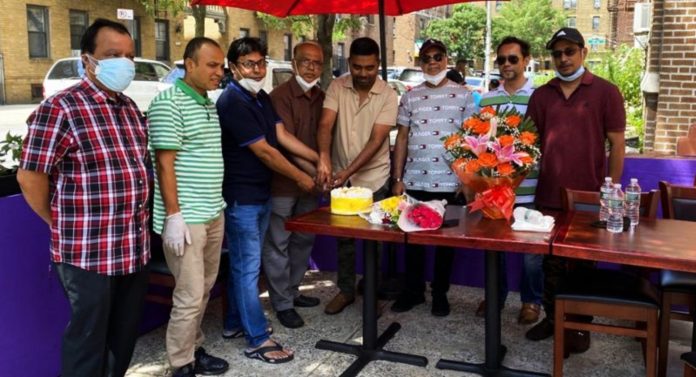 Zahan Ara Dolon: The US-based television channel Bangla Channel entered its second year after many ups and downs. 16th July was the first founding anniversary of this television channel. This celebration was quite spontaneous, albeit to a limited extent due to the Corona period।

Although there was no special event organized at the Bangla Channel office in New York, many prominent well wishers came to greet with flowers. The news editor of ATN USA, Kanu Dutta, and , The president of the editorial board of the popular American Weekly Thikana, Mizanur Rahman attended there. Community activist Gopal Sanyal, IT expert and community activist Shubho Roy, World Human Rights founder Shah Shahidul Haque, special correspondent of Daily Samakal and Ekattar Television and editor of Barnamala News Mahfuzur Rahman has also attended.

In this way, without any arrangement and preparation, a formality started by itself.

Necessary arrangements such as cake celebration were made immediately under the supervision of Bangla Channel Chairman AKM Fazlul Haque and President Shah J Chowdhury.

In New York, the first founding anniversary cake was celebrated with Shahidul Islam, Head of News of Bangla Channel and with the others. Then the chitchat began.

Apart from this, many people from different parts of the world, including Europe and America, greeted each other on the telephone, through online and social media. ❑