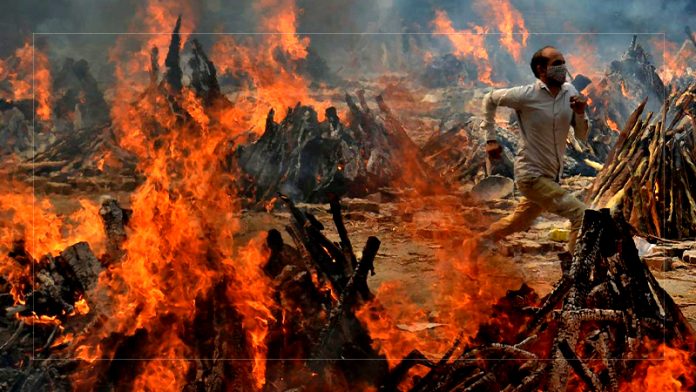 India’s coronavirus death toll crossed 250,000 on Wednesday in the deadliest 24 hours since the pandemic began, as the disease rampaged through the countryside, leaving families to weep over the dead in rural hospitals or camp in wards to tend the sick.

Boosted by highly infectious variants, the second wave erupted in February to inundate hospitals and medical staff, as well as crematoriums and mortuaries. Experts still cannot say for sure when the figures will peak.

Indian state leaders clamoured for vaccines to stop the second wave and the devastation that it has wrought, urging Prime Minister Narendra Modi to stop exporting vaccines, ramp up production and help them procure urgent supplies from overseas.

“People will die in the same way in the third and fourth waves as they have this time” without more vaccines, Delhi’s Deputy Chief Minister Manish Sisodia told reporters.

Deaths grew by a record 4,205 while infections rose 348,421 in the 24 hours to Wednesday, taking the tally past 23 million, health ministry data showed. Experts believe the actual numbers could be five to 10 times higher.

Funeral pyres have blazed in city parking lots, and bodies have washed up on the banks of the holy river Ganges, immersed by relatives whose villages were stripped bare of the wood needed for cremations.

Lacking beds, drugs and oxygen, many hospitals in the world’s second-most populous nation have been forced to turn away droves of sufferers.

“We seem to be plateauing around 400,000 cases a day,” the Indian Express newspaper quoted virologist Shahid Jameel as saying. “It is still too early to say whether we have reached the peak.”❐