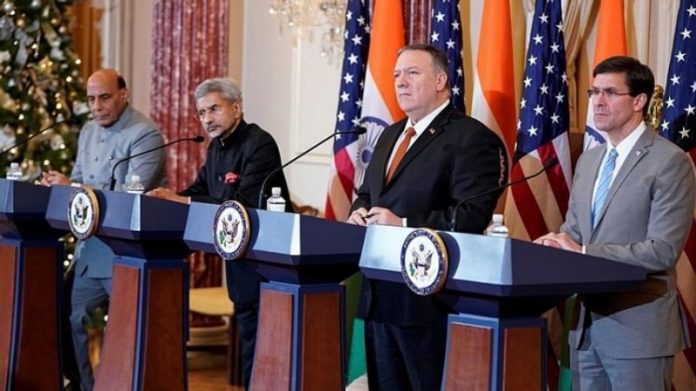 On 27th October, during the recently concluded 2+2 ministerial meeting, India and the United States finally signed the ‘Basic Exchange & Cooperation Agreement for Geospatial Intelligence’ (BECA-GI) marking the final part of the troika of foundational agreements that US usually transacts with close military allies. Having come to fruition amidst escalated tensions with China on the LAC, this momentous occasion was preceded by a notable addition to the ‘Malabar’ exercise with the US welcoming Australia to join the one to be held next month near India.

LEMOA (Logistics Exchange Memorandum of Agreement), the first of the three pacts to be signed in August 2016, allows the militaries of both countries to mutually replenish from each other’s bases. The access to each other’s land facilities, air bases, and ports for the purpose of supplies, spare parts and services (which can then be reimbursed), proves to be highly beneficial. Keeping in mind the close cooperation between the countries in the Indo-Pacific, LEMOA indeed is extremely useful for India-US Navy-to-Navy cooperation. It effectively institutionalised a otherwise ‘ad hoc’ support system, giving weight to the mutual trust between the 2 nations and working to enhance it.

The second in line, COMCASA (Communications Compatibility and Security Agreement) was signed in September 2018, after the first 2+2 dialogue, enabling the transfer of communication security equipment from the US to India and effectively facilitating “interoperability” between the 2 forces — and potentially with other militaries that use US-origin systems for secure data links.

The General Security of Military Information Agreement (GSOMIA) signed earlier in 2002 and extended in 2019 through the Industrial Security Annex focused on greater intelligence sharing and form a  part of these foundational agreements.

Having reviewed the existing bilateral defence cooperation, the US and India have also looked at ways to deepen it. With BECA-GI, India gains real-time access to American geospatial intelligence which will in turn enhance the accuracy of automated systems as well as weapons like missiles and armed drones. Acting majorly as an aid in navigation and targeting through advanced products, it allows India to access topographical and aeronautical data through the sharing of information on maps and satellite images. Moreover it will also be critical in improving the response to natural disasters.

By increasing the lead time on intelligence on imminent threats and enabling us to enhance our domain awareness about adversarial territories, it will strengthen the capabilities of the Armed forces and even increase the already commendable record of success.

At a time when both the countries are battling the Chinese belligerence from all sides – economic, trade, healthcare, military, security, privacy and finance, the alliance is forged at the most strategic moment. With rising Chinese penetration in all economies, the other economic leaders must get together to ward off the evils arising from China. As the Chinese fangs are gripping the smaller economies, it is incumbent upon countries like India and USA to join hands to control the Dragon’s fire from burning down economies.

This step forward between the two nations has been a long time coming, considering what had been a decade long wait for LEMOA which marked the beginning in a manner of speaking. They have managed to reach a compromise and consensus on issues and concerns raised over the years, mainly pertaining to strategic autonomy, protection of its secret communications and operating information among others. It proves to be mutually beneficial especially in strategic terms, with bringing 2 of the 4 in the ‘quad’ closer together at a time of increasing tensions and visible transgressions jeopardizing the regional status and harmony.

This is neither a case of India caving in to the inevitable ‘trend’ of military cooperation nor a reaction to the changing currents, but in all effect a calculated, timely response to the varying needs of the nation, keeping in line with upholding the role it plays in the regional dynamics and it’s open straightforward strategy and approach to any and all factors/variables in this game. India has shown time and again its ability to stand its ground on issues of national interest and importance against foreign intruders and conquerors.

India is highly capable in managing the changing nature of bilateral relations and others, without much need for a call of third-party intervention, to safeguards its economic and border interests, but to forge a lasting alliance to further the goals of a united world, that China is so opposed to, unless it can rule it.❐