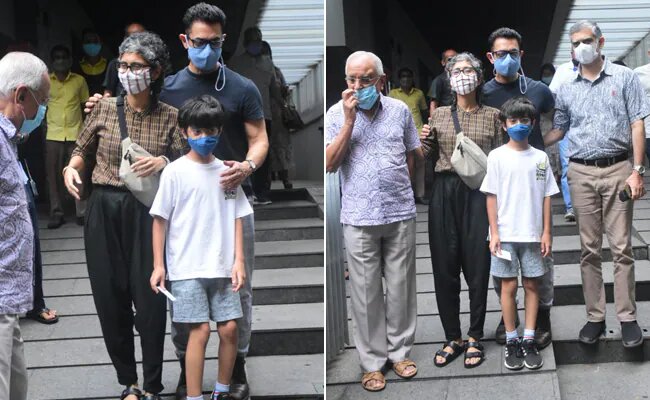 Aamir Khan and Kiran Rao, who announced their separation after 15 years of marriage, were spotted outside a Mumbai eatery on Sunday afternoon.

The former couple were accompanied by their nine-year-old son Azad. Aamir Khan and Kiran Rao were photographed being escorted out by heavy security – they patiently posed for the paparazzi before taking off from the venue.

Aamir Khan was spotted roping in Kiran Rao and Azad for the clicks. Aamir Khan and Kiran Rao were also accompanied by other acquaintances. The former couple, known for keeping it cool and casual for their everyday outings, sported comfy weekend wear and had their face masks on, of course.

In July, Aamir and Kiran made the separation announcement statement, specifying that they would continue to work together on common projects such as Laal Singh Chaddha, and would share their parenting duties for Azad. Just last month, Kiran Rao and Aamir Khan flew back together from the shooting schedule of Laal Singh Chaddha in Ladakh.

During their stay in Ladakh, glimpses of their on-set activities often made it to Instagram. A video of Aamir Khan and Kiran Rao dancing with locals at what appears to be a cultural get-together in Ladakh went crazy viral.