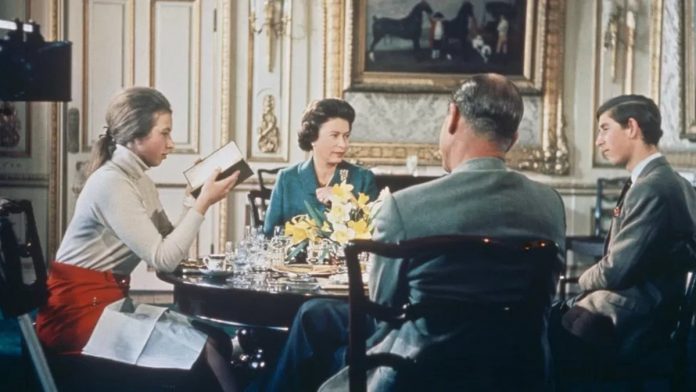 Can a television programme be so engaging that its intermission causes a water shortage, due to an entire nation simultaneously flushing their toilets? That is exactly what happened when the documentary, “Royal Family” was premiered across England on June 21, 1969. 30 million viewers watched it in Britain alone, causing a water shortage in London.

The 110-minute long, colour documentary showed unprecedented snippets of the domestic and personal lives of the British Royal Family. After the Second World War, Europe went through a phase of modernisation, with the royal family becoming increasingly irrelevant to the common man. In order to sweeten and modernise their image, Lord Brabourne—the son-in-law of the royal cousin, Lord Mountbatten—suggested using the new medium of television.

Lord Brabourne opined that it would be critical to introduce the then Prince Charles before his investiture as the Prince of Wales. Palace press officer, William Heseltine was also keen on the idea and eventually Prince Philip was also brought on board. However, unlike Prince Philip—who had ambitions for modernity—Queen Elizabeth was doubtful of the idea.

She had always preferred to play the role of the monarch by the book, and was dubious about exposing the daily lives of the royals. Princess Anne, the only daughter of Queen Elizabeth, was also against the idea, and hated the attention the media brought upon her as a child.

However, in 1968, a BBC documentary unit began filming the family at the Buckingham Palace, Windsor Castle and even on the royal yacht and train. Richard Cawston led the unit and overall, he shot 43 hours of unscripted material.

The documentary contained many beautiful moments, like the legendary breakfast table scene, where the royal family sat dining together. “Royal Family” was able to convey the image that had been aimed to be portrayed—that the royals, were just like any other family, except that they possessed the values and mannerisms that the British Monarchy stands for.

The attempt to humanise the Queen particularly stands out in one cute little scene, where the Queen buys her youngest son, Edward, treats from a candy store. The documentary deliberately attempted to depict the Queen’s domestic duties, alongside her political ones, making her relatable to ordinary working women.

However, it also managed to highlight the ways in which the Queen stood out in comparison to the average woman and mother. Specifically, it showcased the glamourous lifestyle of the family, showing Prince Philip flying an airplane and Prince Charles water-skiing.

Ironically, the shooting and subsequent documentary also helped to surface some of the darker sides of the family. The 2012 book by Peter Conradi, “Great Survivors: How monarchy made it into the Twenty-First Century”, marks one such incident. A particular incident of note, is when one day, during the shooting, Prince Philip snapped at the filming crew, saying, “Get away from the Queen with your bloody cameras!”

Moreover, in the documentary, Queen Elizabeth reportedly compared the then US ambassador to a gorilla. The PA Media Group quoted her saying, “There was a gorilla. I had the most terrible trouble … he had a short body, long arms.”

Perhaps due to such controversies, to limit the access of the public to the lives of the royals and suppress such further requests, the Buckingham Palace retraced from its initial decision and requested the BBC to archive the documentary soon after its premiere. It was shown only once in public, in 1977. The palace later permitted a few clips to be broadcast, but stood firm in its decision to limit the circulation of “Royal Family”.

Hence, the documentary earned a mysterious and legendary status. When it was recently leaked on YouTube, it created quite the spectacle.

So, the next time you watch a documentary, no matter how naive it looks, try questioning the underlying politics involved. You may never know what answers you will eventually find and what motives lay behind the creator’s decisions.