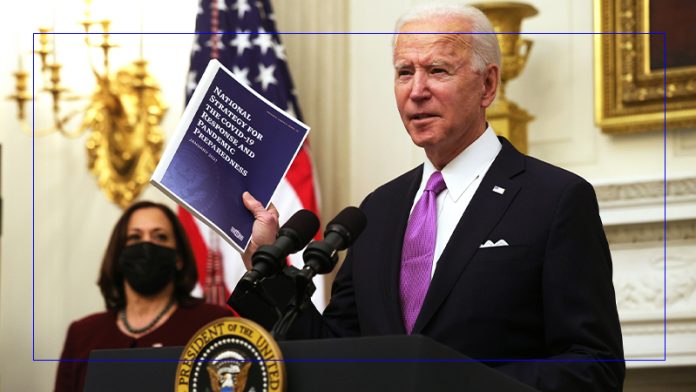 New US President Joe Biden has signed 10 executive orders in his second working day since being sworn in.

Fearing a total death toll of five million in the novel coronavirus, he considers the Covid reality to be a ‘wartime situation’.

Joe Biden has signed 10 executive orders aimed at curbing the spread of coronavirus across the United States. On his first full day in office, the newly-inaugurated president launched new measures on vaccines, masks and testing.

He hit out at Donald Trump’s handling of the pandemic, saying his predecessor’s administration lacked the “urgency, focus and co-ordination we needed”. “We have seen the tragic cost of that failure,” Mr Biden said.

He warned that “things are going to continue to get worse before they get better”, predicted the death toll will reach 500,000 next month and said the roll-out of vaccines across the country had been a “dismal failure”.

The US has seen the highest number of COVID-19 cases and deaths in the world. So far there have been 408,011 fatalities and 24,538,028 infections in the country, according to Johns Hopkins University.

Mr Biden addressed the stark figures in a ceremony on Thursday before he signed the executive orders.”To date, more than 24 million Americans have been infected,” he said. “To put that in context, America makes up 4% of the world’s population – but 25% of the world’s confirmed COVID-19 cases, and nearly 20% of all the COVID-19 deaths.”

The new measures include a requirement for everyone flying to the US from another country to get tested before they depart and then quarantine on arrival, and making it mandatory for Americans to wear face masks while travelling. Other directives call for stronger workers’ rights to protect their safety, and launching a new board to oversee the ramping up of testing.

Steep obstacles face the new president, with political uncertainty over whether Republicans in Congress will help him pass a $1.9 trillion economic relief and coronavirus response package.❐

US ‘back at the table’ to help global economic recovery