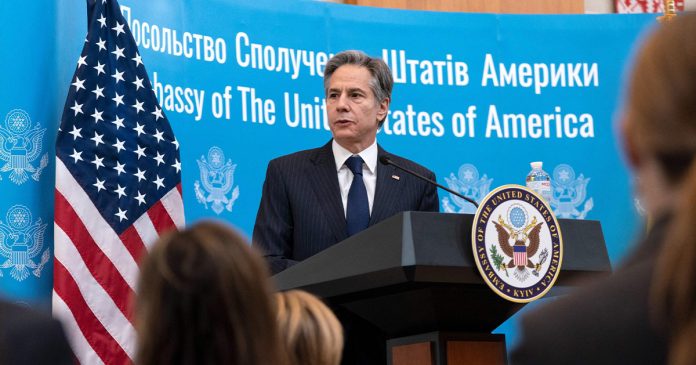 Two days before a meeting with the Russian foreign minister in Geneva, Secretary of State Antony Blinken said Wednesday that Russia could attack Ukraine “on very short notice” and warned of “confrontation and consequences for Russia” if it does.

Blinken made the remarks while speaking to American employees at the US Embassy in the Ukrainian capital, where he landed Wednesday morning in the latest show of US support for the country’s embattled government.

Russia is already supporting an insurgency in eastern Ukraine, and the decision by Moscow to position a huge force around the country’s eastern border was a source of enormous concern, Blinken said.

Both Kremlin and US officials sounded a pessimistic note after a third round of talks on Eastern European security last week, with one Russian diplomat saying that talks with the West were approaching a “dead end.”

Against that grim backdrop, Blinken met in the morning with Ukraine’s president, Volodymyr Zelenskyy, and later with its foreign minister, Dmytro Kuleba.

It was unclear whether Blinken promised them any specific new measures of support to deter Moscow, or to fight Russia’s military in the event of a full-scale invasion, but a State Department official confirmed Wednesday that the Biden administration last month approved an additional $200 million in defensive security aid for Ukraine.

Blinken is set to meet with his Russian counterpart, Sergey Lavrov, on Friday in Geneva. US officials have downplayed hopes for any breakthrough at the meeting, which they have described as an opportunity to test whether Moscow is serious about negotiations. But the White House also said Tuesday that it hoped to highlight that “there is a diplomatic path forward.”

Russia has positioned around 100,000 troops along its western border with Ukraine, although precise estimates vary. On Tuesday, the White House press secretary, Jen Psaki, said that “Russia could at any point launch an attack in Ukraine.”

Russian officials are insisting that the United States provide a formal written response to a set of demands issued by the Kremlin, which included a legally binding pledge from NATO never to admit Ukraine as a member.

US officials have given no indication that Blinken will deliver such a document to Lavrov.

Speaking at a forum in Moscow on Wednesday, Russia’s deputy foreign minister, Sergei Ryabkov, repeated his government’s previous denial that Moscow has any plans to move its forces into Ukraine.

“We will not attack, strike, invade, quote unquote, whatever, Ukraine,” Ryabkov said.

He said the Russian troops around Ukraine’s border were conducting training exercises.

“Every country in the European Union should understand that, though the price of deterring Russia is high, the cost of stopping a new war will be higher” if it starts, Kuleba said after the call, local media reported.

Kuleba said the two discussed economic policies to both deter Russia and to support Ukraine. The European diplomat “agreed that one of Russia’s goals is to destabilize Ukraine” economically and that the European Union was ready to help, Kuleba said.