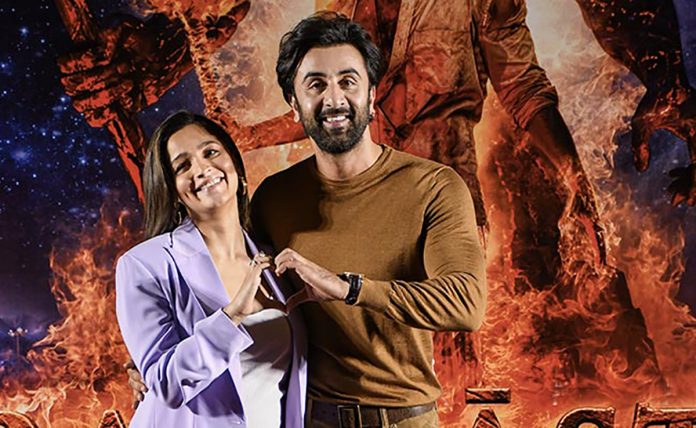 wo days before Brahmastra, the year’s biggest release, hits the screens, its stars Ranbir Kapoor and Alia Bhatt have faced protests during their promotional tour in Madhya Pradesh. The couple were forced to cancel their visit to an iconic temple as protesters held up black flags and raised slogans to block them.

The star couple, in Ujjain to promote “Brahmastra Part-1: Shiva” on Tuesday, turned back without visiting the famous Mahakaleshwar Temple “to seek the blessings of Lord Shiva”.

There were security worries for the couple, who are expecting a baby. The film’s director, Ayan Mukherji, later visited the temple with the Brahmastra crew.

The protests revolve around an 11-year-old comment by Ranbir Kapoor, 39. “I am a mutton, paya, beef…red meat guy. I’m a big beef guy,” he had said during an interview conducted over a meal.

A section of social media users has been digging up Ranbir Kapoor’s old interviews after his recent remarks on wife Alia’s pregnancy were criticised. The “beef” comment has gone viral and has sparked a backlash. Some are posting the hashtag #BoycottBrahmastra on Twitter.

Ayan Mukherjee said his film stands for positivity and hoped its “positive energy” would touch people.

He claimed that Ranbir Kapoor and Alia Bhatt were “keen” on visiting Mahakaleshwar with him, but the protests gave them pause.

“We reached and we heard about this and I felt a little bit that let me go alone. Eventually, I had gone to seek blessings. And I just didn’t want to take Alia there in her current condition. So I went alone. Though I felt bad and I did feel they could also have come for their darshan, that is on me,” Ayan Mukherjee said.

“My thing is we must only spread warmth and positivity because that is what we all want and that is what the whole world needs. And I truly think that we worked so hard on the film, there is so much celebration of Indian culture. I feel that every single person is going to feel that positivity,” he said.

The minister denied that the star couple had been stopped from visiting the temple and claimed that officials had instead requested them to go ahead. “No one stopped them from offering prayers, they decided on their own not to go there. The couple was requested by the administration to go ahead to offer prayers. There was adequate security, but they decided to not go there. No one stopped them,” he said.

Members of the Bajrang Dal, which is linked to the state’s ruling BJP as part of the Sangh Parivar, held black flags and placards and shouted slogans against the film star. They also clashed with the police. In videos, the police were seen using canes to disperse the protesters.

“Due to VIP movement at the temple, we were taking security calls and the protesters were asked to stay behind the barricading, a member from Bajrang Dal came and started breaching the security,” said OP Mishra, a police officer.

Sharing a viral photo of Bollywood actors with Prime Minister Narendra Modi, Ms Chaturvedi wrote, “None of this photo op will help if you’ll continue to be mute spectators to hate and believe it’s not your business to talk politics. They will come after you anyway. Mahakaleshwar temple protests in Ujjain is a case in point. Shame that political prejudice is leading to such ugliness.”

The hugely anticipated Brahmastra trilogy, made with a budget of ₹ 400 crore, will debut in the cinemas on Friday.

“…I had my film released a month-and-a-half back, called Shamshera. I didn’t feel any negativity. The film didn’t run in the box office probably because the audience didn’t like the film. Eventually, it is about the content,” Ranbir Kapoor said during a promotional interaction of Brahmastra.

“If you give a good film, give good content, if people feel entertained, of course who doesn’t want to go to the movies, to the cinema, experience a different emotion, get moved by a character, get entertained, have a great laugh, cry, feel something? We all want to feel that. And it is only for that. If a film doesn’t do well, it is not because of any other reason except that the content did not work,” the actor said.