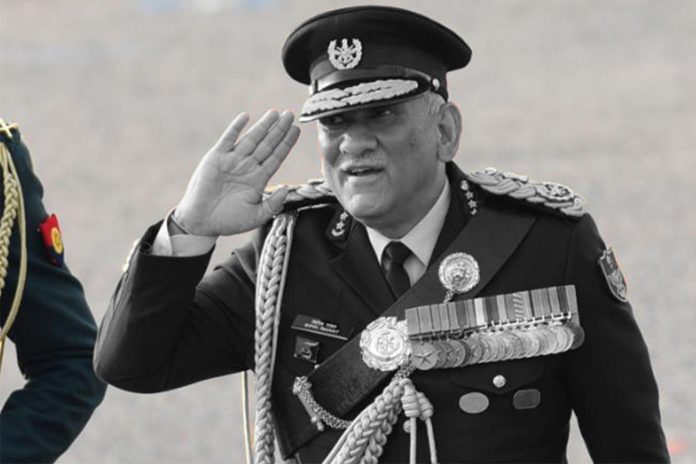 General Bipin Rawat, India’s first Chief of Defence Staff, and his wife died today after a military chopper crashed in Tamil Nadu, killing 13 on board. The only survivor, an Air Force Group Captain, is being treated for severe burns.

“With deep regret, it has now been ascertained that Gen Bipin Rawat, Mrs Madhulika Rawat and 11 other persons on board have died in the unfortunate accident,” the Indian Air Force (IAF) tweeted.

Deeply anguished by the sudden demise of Chief of Defence Staff Gen Bipin Rawat, his wife and 11 other Armed Forces personnel in an extremely unfortunate helicopter accident today in Tamil Nadu.

His untimely death is an irreparable loss to our Armed Forces and the country.

The person being treated at the military hospital in Wellington is “Group Captain Varun Singh”, said the Air Force.

The IAF had confirmed a little before 2 pm that an Mi-17 V5 helicopter with General Rawat on board had “met with an accident near Coonoor, Tamil Nadu”.

The helicopter crashed shortly after it took off from the Air Force base in Sulur at 11.45 am, Coimbatore, for Wellington in the Nilgiri Hills.

The General was heading to the Defence Services Staff College in Wellington to address the faculty and students.

It was making its descent and would have landed in 10 more minutes when it came down, barely 10 km from a road. The Air Force has ordered an Inquiry into what happened.

Videos showed steaming wreckage scattered on a hillside and rescuers struggling through smoke and fire to locate bodies. Charred bodies were pulled out from under mangled metal and fallen trees.