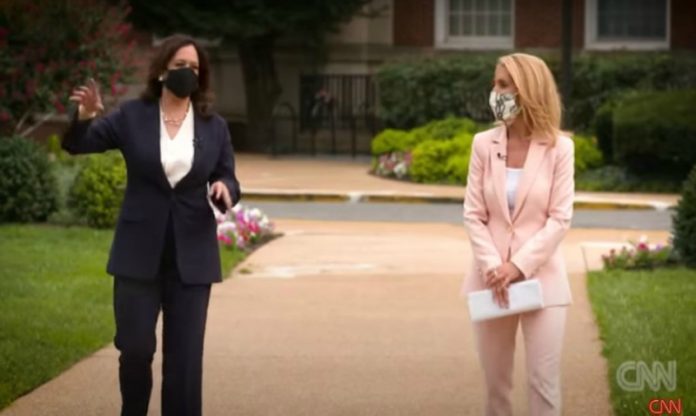 Kamala Harris: ‘We do have two systems of justice in America’

“We do have two systems of justice” for Black and White Americans, Harris said.

The comments from the first Black and South Asian American woman on a major party presidential ticket come less than two months before the November election in an exclusive “State of the Union” interview with CNN’s Dana Bash on Sunday, in which Harris suggested Trump was not a “real leader” on racial justice and was trying to “pretend that he has been a leader” on the coronavirus pandemic.

“I don’t think that most reasonable people who are paying attention to the facts would dispute that there are racial disparities and a system that has engaged in racism in terms of how the laws have been enforced,” said Harris, a California senator and former state attorney general. “It does us no good to deny that. Let’s just deal with it. Let’s be honest. These might be difficult conversations for some, but they’re not difficult conversations for leaders, not for real leaders.”

Barr, the nation’s top law enforcement official, dismissed the idea of “two justice systems” in a CNN interview Wednesday. “I think we have to be a little careful about throwing the idea of racism around,” he said. “I don’t think it is as common as people suggest.”

Asked specifically about systemic racism during his visit to Kenosha, Wisconsin, last week, Trump refused to acknowledge it, saying, “Well, you know, you just keep getting back to the opposite subject. We should talk about the kind of violence we’ve seen in Portland and here and other places.”

Protests against racial injustice, particularly in law enforcement, have swept across the country as police violence against Black Americans — including George Floyd in Minneapolis, Breonna Taylor in Louisville, Kentucky, Jacob Blake in Kenosha, Wisconsin and Daniel Prude in Rochester, New York — has dominated headlines this summer.

A 2019 survey from the Pew Research Center found that Black Americans were about five times more likely than White Americans to say they’ve been unfairly stopped by police because of their race or ethnicity.

The White House issued a directive Friday night banning racial sensitivity training on “white privilege” in federal agencies. The administration blasted the trainings in a memo as “divisive, anti-American propaganda.”

Pressed about her call for charges against the Kenosha police officer who shot Blake seven times in the back, Harris insisted she had been “very clear” that charges should be “considered in a very serious way.” Pressed again, she repeated her initial statement that “based on what I saw, he should be charged,” but “I am not in full possession of the facts and the evidence.”

With a US death toll of more than 188,000, Harris attacked the Trump administration for “minimizing the seriousness” of the coronavirus outbreak and failing to do enough for millions of American struggling to make ends meet.

“There is no question that Donald Trump has been an abject failure and incompetent when it comes to addressing the severe job loss that has happened as a result of the pandemic, because he has failed to address the pandemic itself,” Harris told Bash. “We need to talk about how the economy is doing based on how working people are doing. And right now, working people are suffering.”

The unemployment rate in the United States stands at 8.4%, the Bureau of Labor Statistics reported Friday. That’s down from a high of 14.7% in April, but still far from the pre-pandemic unemployment rate of 3.5% in February.

Harris continued to say she would not trust Trump’s word alone on the safety and efficacy of a coronavirus vaccine, but said she “would trust the word of public health experts and scientists,” including Dr. Anthony Fauci, the director of the National Institute of Allergy and Infectious Diseases.

“Joe Biden and I have a plan,” Harris said on vaccine distribution. “Donald Trump does not.”

Trump said Friday he believed a coronavirus vaccine could “probably” come sometime in the month of October, though experts agree it is more likely to come later.

He also said Friday the US is “rounding the corner on the virus.” But earlier that day, a new model from the University of Washington’s Institute for Health Metrics and Evaluation, whose previous models were routinely cited by the White House in the early days of the pandemic, projected more than 400,000 Americans could die from the virus by the end of the year.

Asked whether she believes states should mandate a coronavirus vaccine for public school students along with other vaccinations, Harris said she would listen to public health experts.

Harris also declined to back a mask mandate on a federal level, instead calling for a “national standard.” “This is not about punishment. It’s not about big brother,” Harris said.

“We have a President of the United States who made this a partisan issue,” she continued. “The virus could care less who you voted for in the last election or who you plan to vote for in the next election. We need leadership that appreciates that, on certain issues, they should not be partisan. Wearing a mask certainly shouldn’t be one of them.”

Russian interference could ‘theoretically’ cost us the election

Harris said “of course” Russian interference in the US presidential election in 2020 could “theoretically” cost Democrats the White House in November.

“Could it cost you the White House?” asked Bash.

“Theoretically, of course. Yes,” Harris responded. “I do believe that there will be foreign interference in the 2020 election, and that Russia will be at the front of the line,” Harris continued.

An intelligence bulletin last week from the Department of Homeland Security said that Russia is trying to sow doubt about the 2020 election by amplifying false claims about mail-in voting and fraud. Last month, the intelligence community’s top election security official revealed publicly that Russia is working to “denigrate” Biden, while China and Iran prefer that Trump is not reelected.

“I do get along with President (Vladimir) Putin,” Trump said at a news conference Friday, declining to join European leaders in condemning Russia and demanding an explanation for an attack on Russian opposition leader Alexey Navalny. “I don’t know exactly what happened. I think it’s tragic. It’s terrible; it shouldn’t happen. We haven’t had any proof yet, but I will take a look,” Trump said.

Harris also opened up about her family in this extended interview with Bash, including her relationship with her husband, her step-children and her late mother.

“I think she’d be really, extremely proud,” Harris said, remembering her mother, who died of cancer in 2009. “And she would say, beat Trump.”

Harris has two step-children, Cole and Ella, with her husband, Doug Emhoff.