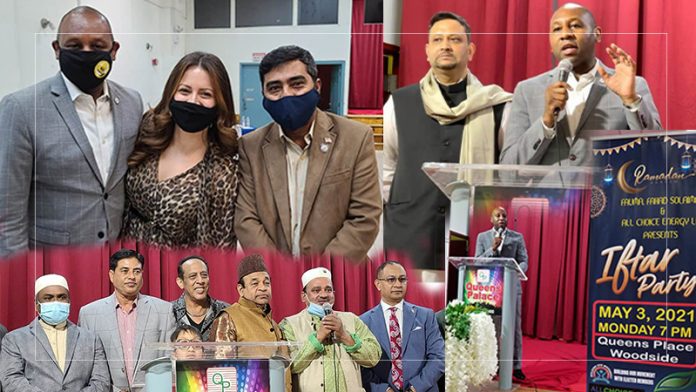 Zahan Ara Dolon: Fahad Solaiman, a mainstream dynamic politician and well-known figure in the community, director of the Jackson Heights Business Association and director of Fauma Innovative and All Choice Energy.

In a very short time, he has been a leader in community and mainstream politics. That is why Fahad Solaiman is enlightening his own rightful place. Fahad Solaiman hosted an Iftar party on May 3 at the Queen’s Palace in Woodside. People of all religions, castes and tribes were present at the event. There were mainstream politicians, community and people of different professions.

Fahad Solaiman gave a welcome speech at the beginning of the program. Thanking everyone for attending the ceremony he said, “We live in this country, this is our country now”. So, we have to move forward with everyone.

“To move this community forward, we all need to work together ” said Donovan Richards, president of Queens Borough. We need more capable leadership like Fahad Solaiman to take the community forward. He wished everyone a blessed Ramadan.

Catalina Cruz wishes everyone Ramadan and Eid in advance. On the other hand, Jessica Gonzalez, as she is coming to the Iftar party, even though she belongs to a different religion, she is fasting today and has Iftar with everyone. She proved that there is no conflict between religions.

Shamim Osman was given a civic reception in New York