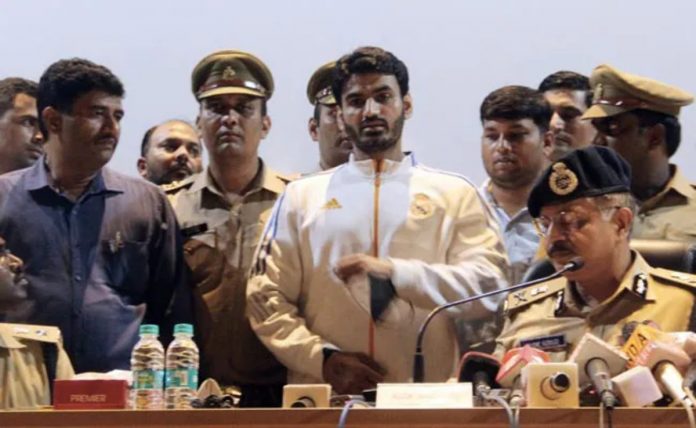 But by the time he reached the Indira Gandhi International Airport Friday night, the video of him abusing and assaulting the Noida woman had gone viral and that changed his planned course of action, the officials said.

He was booked for assaulting and abusing a woman resident inside their housing society.

“From Delhi, Shrikant Tyagi went Meerut and then to Muzaffarnagar in western Uttar Pradesh. He had briefly gone to Rishikesh and Haridwar also in Uttarakhand,” Police Commissioner Alok Singh said.

“On Sunday, he once again entered Uttar Pradesh and kept changing hideouts in Meerut, Muzaffarnagar, Baghpat and nearby areas in order to evade arrest,” Singh told reporters.

According to officials privy to the probe, Tyagi wanted to quickly reach Lucknow because of which he thought to take a flight from Delhi.

“But the video of him assaulting and hurling expletives at the woman had already done damage to him. The videos were viral and he feared he would not be able to meet his contacts in Lucknow even if he made it to Lucknow airport,” an official told PTI.

Commissioner Alok Singh said during the four-day period since he fled Noida, Tyagi kept changing vehicles and electronic gadgets and devices, including mobile phones, in order to not get traced by police.

“He even went outside UP borders to escape but our teams used human intelligence, technical intelligence to track him,” the officer said.

“The main accused cleverly kept hiding and from time to time maintained radio silence, electronic silence in order to escape being tracked. But police continued its efforts and the Noida police today arrested him from Meerut along with other support teams,” he added.

Tyagi now faces multiple charges, including those under the Indian Penal Code and the Gangsters Act.

Until he went underground Friday night, Tyagi claimed to be the national executive member of the BJP’s Kisan Morcha and the national co-coordinator of its Yuva Samiti, even as the ruling party denied any links with him.

The Opposition has also mounted an attack on the BJP over the issue, sharing purported pictures of Tyagi with senior saffron party leaders, including its national president J P Nadda.