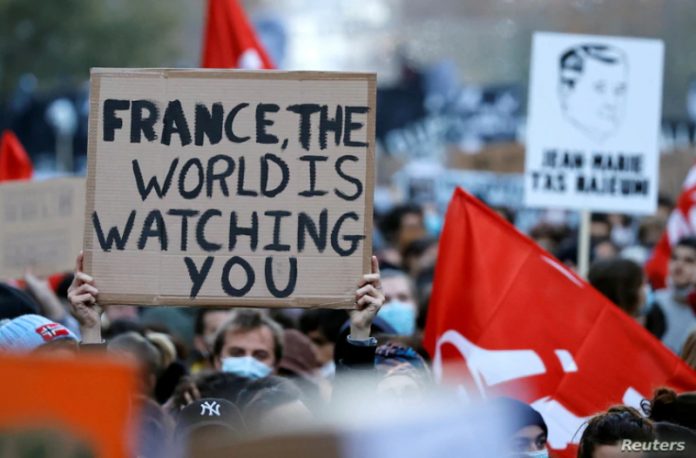 Violent clashes erupted Saturday in Paris as tens of thousands took to the streets to protest new security legislation, with tensions intensified by the police beating and racial abuse of a Black man that shocked France.

Several fires were started in Paris, sending acrid smoke into the air, as protesters vented their anger against the security law that would restrict the publication of police officers’ faces.

About 46,000 people marched in Paris and 133,000 in total nationwide in about 70 cities, including in Bordeaux, Lille, Montpellier and Nantes, the Interior Ministry said. Protest organizers said about 500,000 joined nationwide, including 200,000 in the capital.

President Emmanuel Macron said late Friday that the images of the beating of Black music producer Michel Zecler by police officers in Paris last weekend “shame us.” The incident magnified concerns about alleged systemic racism in the police force.

Several cars, a newspaper kiosk and a brasserie were set on fire close to Place de la Bastille, police said.

Some protesters threw stones at the security forces, who responded by firing tear gas and using water cannon, an AFP correspondent said.

Police complained that protesters impeded fire services from putting out the blazes and said nine people had been detained by the early evening.