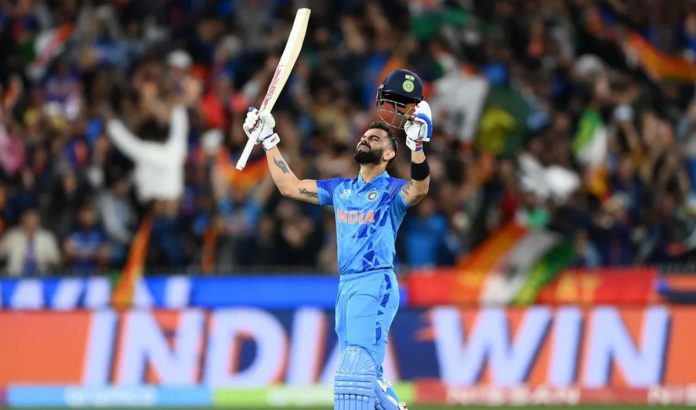 What’s common between Virat Kohli, Lionel Messi and Roger Federer? They are the extra-terrestrials who impacted their respective sport in a way the rest seem mortals. On October 23, Kohli’s ‘Virat’ performance of 82 runs (53 balls, 6x4s, 4x6s, 154.72 SR) against arch-rivals Pakistan in the ICC T20 World Cup 2022 was another testament to his boundless cricketing ability that mere mortals can rarely replicate.

Kohli has been one of the torchbearers when it comes to changing the Indian team’s image in Australia. India no longer goes for a series Down Under as the underdog or the second-best side.

The former captain has sensational numbers in Australia. In 11 T20I games there, Kohli has scored 451 runs at an impressive strike rate of 144.55 and an average of just under 65. In those 11 innings, he has scored five fifties, hit 32 fours and smashed 12 sixes.

No other contemporary Indian batsman comes close to similar numbers on Australian soil. With his 82*, Kohli put an end to months of criticism and doubt. It was the kind of innings that left doubting mouths agape.

Questions had lingered about whether the best version of Kohli had already left. The truth is, Kohli never left, he just moved aside for a while, an arc that even the greatest of the greatest go through. Messi was ridiculed, doubted and lambasted for not winning an international trophy with Argentina. The Argentinian maestro appeared in four finals between 2014 and 2019 but the trophy always eluded him.

While Messi continued to win accolades and do alien-esque things on the pitch for Barcelona, his dry spell with Argentina always stung the most. Then came the 2021 Copa America, and the quest for an international trophy ended. Messi burst into tears as the realization hit, but soon he let the moment, and its relief and its beauty, sink in.

Kohli experienced something similar. When Ravichandran Ashwin hit the winning shot over mid-off, some 90,000 at the MCG showed their elation. But there was Kohli, the master of this valiant run chase, soaking it all in, almost going numb until his fellow colleagues came around to hug him.

The vintage aggression that we are so used to seeing was now only seen in his batting and not in his body language. It was like the completion of a protagonist’s character arc. He did the unthinkable against Pakistan and if you have watched Kohli bat in your life, you know that he will delve deeper to extract more out of himself.