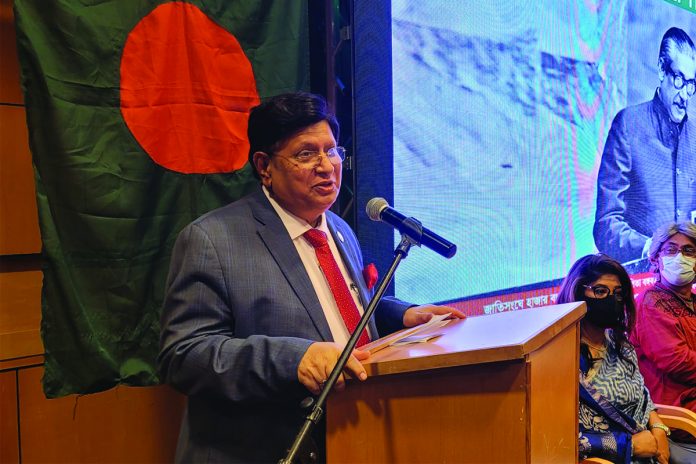 The New York based organization Shah Group was a special supporter of the event. Abdul Momen, Foreign Minister of the Government of the People’s Republic of Bangladesh was the chief guest. The chief guest said that, The passage of the bill by the New York State Senate declaring ‘September 25’ as ‘Bangladeshi Immigrant Day’ is a special event. Bangladeshi founding president Sheikh Mujibur Rahman gave a speech in Bengali at the 29th General Assembly of the United Nations on September 25, 1974. This initiative to pay homage to the father of the Bengali nation Bangabandhu Sheikh Mujibur Rahman in the American Mainstream will be remembered forever.

Dr. Nazrul Islam, Head of UN Development Research was the keynote speaker at the event. He highlighted the various historical significance of September 25. And demanded the declaration of Immigrant Day by placing a bill in the National Assembly of Bangladesh. He said Bishawjeet Saha, the founder of the Muktadhara Foundation in New York, had lobbied for the adoption of the resolution for declaration of the Bangladeshi Immigrant Day. It is an unprecedented event.

He said that on September 25, Bangabandhu Sheikh Mujibur Rahman presented Bangladesh and Bengali language to the world. He urged the foreign minister to take initiative in this regard.

The event began with the screening of a documentary on the Bangladeshi Immigrant Day. The documentary presented Bangabandhu’s historic Bengali speech at the United Nations. And in this regard Prof. Dr. Anisuzzaman, former Finance Minister Abul Maal Abdul Muhith, AH Mahmud Ali’s response was presented. The documentary features the speeches of Congresswoman Grace Meng and Senator Stavisky, who placed the bill in the Senate.

Biswajeet Saha, Founder of Muktadhara New York, delivered the welcoming speech. He told about the unveiling of a commemorative postage stamp by the United States Postal Service on the occasion of the birth centenary of Father of the Nation Sheikh Mujibur Rahman.

Foreign Minister Dr Abdul Momen described the rescue of the video of Bangabandhu’s speech at the UN. He highlighted various aspects of Bangladesh moving forward under the leadership of Bangabandhu and The prime minister Sheikh Hasina.

New York State Senator John C Liu appeared at the end of the ceremony. At the end of the discussion, the national anthems of Bangladesh and America were served. Served by artist Jarin Maisha and Tajul Imam. The show was presented by Clara Rosario. Minhaj Ahmed, Gopal Sanyal, Ishtiaq Rupu, Tofazzal Liton and Ashfaq Amin were in collaboration.