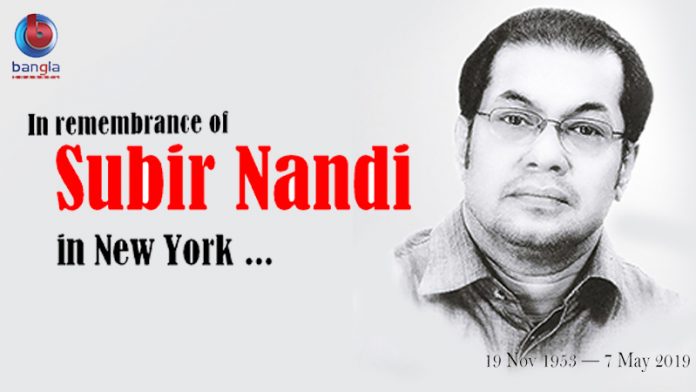 Zahan Ara Dolon: In the memory of late Ekushey Padak winning musician Subir Nandi, an event is going to be held in New York.

According to the organizers, the memorial service will be held on Friday, May 18 at 8 pm at Gulshan Terrace in New York City.

The organizer and promoter of the event is the New York based television channel ‘Bangla Channel’.

President of Bangla Channel, Shah J Chowdhury told Ruposhi Bangla that, including eminent personalities from the New York immigrant art-literature-culture arena, Subir Nandi fans will be present at the event. He added that, the event will be accessible only to invited guests.

Shah J Chowdhury, replying to a question on who will be present at the commemoration ceremony, said that, “Subir fans of New York and eminent personalities from the field of art, literature and culture of the country have been invited to attend the function.” In addition, many people from the music arena and the community will be present at the event. There will be various professional immigrant Bengalis and prominent people among Bangladeshi-Americans.

The ageless musician of Bengali music, Subir Nandi, died on 7 May 2019 at the Singapore General Hospital.

In his 40 long career years, well known musician Subir Nandi has sung more than two and a half thousand of songs . He has served numerous popular songs from radio to television and movies.

In 1981, his first solo album ‘Subir Nandir Gaan’ was released under the banner of Disco Recording. Subir Nandi’s first playback song was in 1976, the film ‘Suryagrahan’ directed by Abdus Samad.

He won five National Film Awards for his playback singing in films.

In 2019, the Bangladesh government awarded Subir Nandi the second highest civilian honour, the Ekushey Padak, for his contribution in music.❐