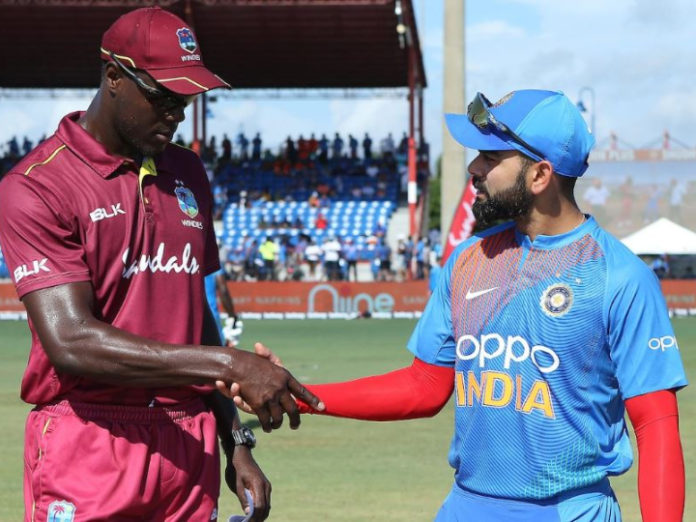 Hindustan Surkhiyan Desk: Virat Kohli-led young Indian team will aim to go for a clean sweep when they take on West Indies in the final match at the Providence Stadium on Tuesday.

India on Sunday secured a 22-run win by the DLS method in the second T20I in Florida, thereby clinching the series. After Sunday’s win, skipper Virat Kohli hinted that he might experiment with the line-up in Tuesday’s game. India will be in a quest to build the ‘best 15’ side for the World T20 next year.

Windies will look to play for lost pride and end the three-match rubber on a high, before taking on the Men in Blue in the three ODIs and the subsequent two-Test series.

After bit of a delay due to wet outfield conditions, Virat Kohli won the toss and opted to bowl first against Windies at Guyana. Rohit, Khaleel and Jadeja make way for KL Rahul, Deepak Chahar and Rahul Chahar – who makes his international debut today.

Virat Kohli: We are gonna bowl first. It’s been under the covers for a bit. Rohit’s resting today, someone had to lead. Couple of guys playing their first game too. KL’s playing. Rahul Chahar and Deepak Chahar come in.

Carlos Brathwaite: Firstly, need to win first. We need to bat well, bowl well, field well. There was a lot progression from the first game, especially with the bat. We had a chat about it, keeping our positive intent with boundary hitters.

India have won the toss and have opted to field.

Virat Kohli To Remain Captain In All Formats