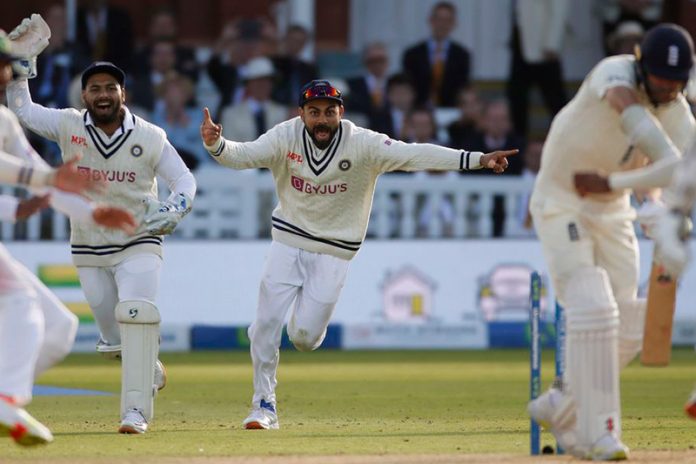 MUMBAI, Aug 17 (Reuters) – India lavished praise on Virat Kohli’s test team on Tuesday with former players and local media lining up to congratulate the side after they pulled off a spectacular victory against England in the second test at Lord’s.

India went into the final day on Monday, a day after the country celebrated its 75th Independence Day, simply hoping to avoid defeat but tailend batting duo Jasprit Bumrah and Mohammed Shami helped turn the match on its head.

Setting the hosts 272 for victory, India’s pacemen then bowled with aggression and control to bundle England out for 120 in the last two sessions for a 151-run victory and a 1-0 lead in the five-match series.

While the popularity of test cricket has waned due to the rise of the shorter T20 format, the match was a perfect advertisement for the longest form of the game, with momentum shifting one way then the other over the five days.

“That was some test match #TeamIndia! Enjoyed watching every moment of it,” India batting great Sachin Tendulkar said on social media.

“The resilience and grit that the team displayed in difficult situations is something that stood out for me. Very well played!”

Former skipper Sourav Ganguly, the current president of the cricket board, was at Lord’s with other BCCI office-bearers and lauded the team’s “character and guts”.

Former India wicketkeeper Dinesh Karthik, who was also at the venue working as a TV pundit, said the final day had been riveting.

“From survival to revival, the final day at Lord’s was no less than a binge-worthy thriller,” he said on Twitter.

Kohli said the win had come a day late, missing the Independence Day celebrations back home, but it was the “best gift” they could give to the people of India and Indians living in England.

And he promised there would be no let up in intensity from his team for the remainder of the series.