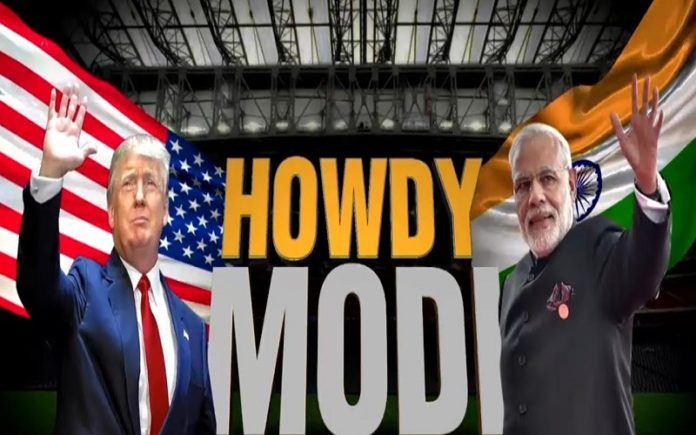 Hindustan Surkhiyan Desk: Both India and the United States are all set to witness the much-awaited ‘Howdy, Modi’ event which will provide the world a glimpse of the valuable contributions of Indian-Americans to the cultural, intellectual and social landscape of the United States. Prime Minister Narendra Modi has already reached United States and will grace the event along with US President Donald Trump on Saturday. This is for the first time, PM Modi and President Trump would share the stage to address more than 50,000 Indian-Americans during the September 22 event. The two world leaders will be a part of a session called “Shared Dreams, Bright Future” that would focus on the success of Indian-Americans as well as the strength of the US-India relationship.

Despite heavy rains resulting in a standstill like situation in Houston, organisers are on their feet to make Indian prime minister’s biggest ever rally in the American country historic. As per reports, PM Modi will address a crowd of over 50,000 Indian-Americans on September 22 at the NRG Stadium, at an event hosted by Texas India (TI) Forum in Houston.The White House has confirmed that even President Trump would attend the event, making it the first time ever that the two leaders would meet in the US outside of Washington DC or New York, where the United Nations is headquartered.

The ‘Howdy, Modi!’ event is the third meeting between Donald Trump and PM Modi in three months, after the G20 summit in Japan in June and the G7 summit in France last month. Houston is considered the energy capital of the world and one of the most diverse cities in America.

Not just America but India is all pumped up to witness the event and are looking forward to PM’s address during the event. The Texas India Forum said the event will start with a 90-minute cultural programme – “Woven: The Indian-American Story” – that is a celebration of Indian-Americans and their valuable contributions to the cultural, intellectual and social landscape of the US.

ABP News would be intensively covering the historic event and will keep on giving you real time updates. Here’s when where and how to watch Howdy, Modi event from India: