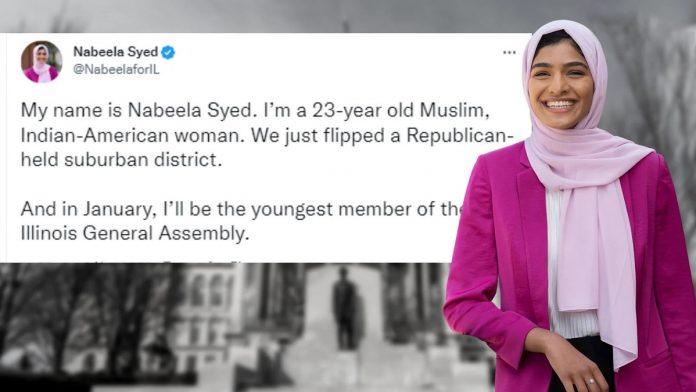 Nabeela Syed has scripted history by becoming the youngest member to get elected to the Illinois General Assembly. In the recently held US midterm elections, the 23-year-old Indian-American defeated her Republican opponent Chris Bos. She received 52.3% votes in the election for the 51st District in the Illinois State House of Representatives.

Sharing her excitement on Twitter, Mr Syed said, “My name is Nabeela Syed. I am a 23-year-old Muslim, Indian-American woman. We just flipped a Republican-held suburban district.”

She added, “And in January, I’ll be the youngest member of the Illinois General Assembly.”

And in January, I’ll be the youngest member of the Illinois General Assembly.

Nabeela Syed has also written a long note talking about her journey on Instagram. Talking about her mission, she said, “When I announced for State Representative, I made it a mission to genuinely engage in conversation with people – to give them a reason to get involved in our democracy and hope for better leadership that represents their values.”

Ms Syed added that she won this race “because we engaged in that conversation.”

Thanking everyone for their support, Ms Syed said, “I knocked every door in this district. Tomorrow, I start knocking them again to thank them for placing their trust in me. I’m ready to get to work.”

People, on social media, made a bee-line to congratulate Ms Syed.

Nabeela Syed did her graduation in Political Science and Business Administration from the University of California, Berkeley.