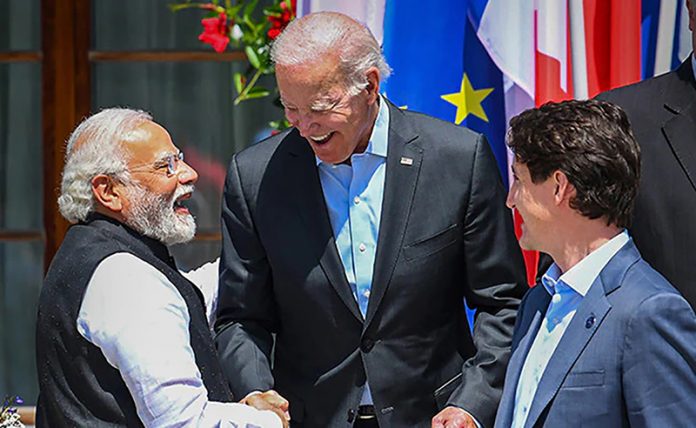 Just as Prime Minister Narendra Modi was getting ready for a group picture at the G7 summit, US President Joe Biden made his way to the Indian leader, tapped him on the shoulders, and the cameras captured the moment and the camaraderie on display between the two leaders as they greeted each other.

The video showed Joe Biden walking up to PM Modi, who was happily chatting away with the Canadian Prime Minister Justin Trudeau. The Prime Minister turned around and the two were seen greeting each other. The smiles were a bonus.

At the Quad summit in May, the two leaders agreed to continue their useful dialogue and pursue their shared vision of taking the India-US partnership to a higher level.

India is among the five partner countries invited to attend the G7 Summit in Germany.

Besides Biden, PM Modi was seen interacting with the prominent leaders of the group including French President Emmanuel Macron.

On the second day of the summit in Elmau, the main focus of the G7 heads of state and government will be continued support for Ukraine.

Besides the G7 event, PM Modi will hold bilateral meetings with leaders of some of the participating countries on the sidelines of the Summit.