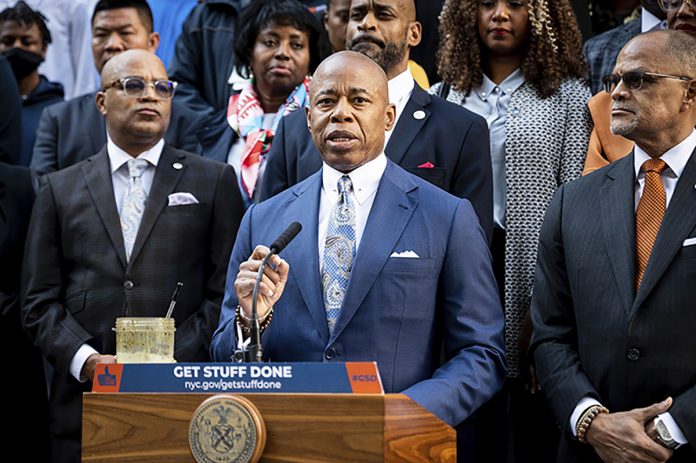 NYC Mayor Adams declared a state of emergency Friday over the city’s migrant crisis and pleaded for financial and legislative assistance from the federal government and state lawmakers.

The declaration will suspend certain land-use requirements so the city can more rapidly set up emergency housing for migrants, such as the controversial tent camp set to be constructed on Randalls Island, Adams said in a speech from City Hall.

But the declaration only goes so far.

With more than 17,000 South and Central American migrants currently in the city, the homeless shelter system is nearly at 100% capacity and social services are being strained to the brink of collapse, Adams said.

“It is burning through our budget,” he said, predicting that the city will spend more than $1 billion on the crisis in this fiscal year alone. “This is unsustainable.”

As a result, Adams demanded that President Biden’s administration and Albany lawmakers do what they can to help, including allocating emergency funding and passing legislation that would expedite work permits for the migrants.

“This is an all-hands-on-deck moment,” he said.

The massive influx of migrants has placed a big burden on the city’s homeless shelter system. That pressure has led to several apparent violations of the state’s right-to-shelter law, which requires the city to provide housing to anyone who seeks it within a proscribed timeframe.

To relieve the burden on shelters, Adams signaled last week that he planned to house some migrants in tents at an Orchard Beach parking lot in the Bronx. But earlier this week, he reversed himself over concerns of flooding there. Instead, he opted to move the tent encampments to Randalls Island.

In a statement released by the Legal Aid Society and the Coalition for the Homeless, which act as watchdogs regarding the right to shelter law, the groups slammed Adams for failing to invest more adequately in affordable housing, which would also ease the burden on shelters.

“It is the city’s historic shameful failure to adequately invest in affordable housing that has continued to fuel mass homelessness,” they said in the statement. “We reaffirm our call on the city to abandon its plan to construct tent cities, and to instead focus on high-quality indoor shelter options and permanent housing.”

Also at play on Friday are the politics of the situation — both here and in other states. Many of the migrants streaming into the city have come from Texas. That state’s governor, Greg Abbott, who’s running for re-election, has directed buses filled with asylum seekers to the Big Apple as a way to criticize Biden’s border policies.

The mayor said he is not concerned about politically putting Democratic allies in a tight spot.

“[Biden] understood the urgency of the moment,” Adams said, referring to his most recent conversation with the president. “Speaking with the governor’s office, they understand the urgency of the situation. There was never a time that they stated, ‘Eric, you know, we don’t want to engage in this conversation because it’s too political.’ Nope, they did not do that at all.”

He would not offer specifics regarding exactly how the state might help as far as providing locations to house asylum seekers, but noted that “there are plenty of locations that are under state control that I believe we should look at.”

“Right now, I’m not going to disclose exact locations,” he said. “As soon as we get the approval from them — the inspections that state that they’re suitable for people to be inside — we’re going to make a formal announcement.”

During a press conference after his speech, Adams offered few details on which aspects of the city’s land use laws his administration intends to tweak. He did say the city does not plan to suspend its Uniform Land Use Review Procedure as part of the process, though.

Bronx Councilman Rafael Salamanca, who chairs the Council’s Land Use Committee, said he has “no idea” which specific land use requirements the mayor is targeting, but speculated that the changes could involve rezoning industrial and commercial areas to house the asylum seekers. That could mean retrofitting vacant warehouses to help ease the city’s burden, he said.

“My team is looking into it and we’re reaching out to [the mayor] because we want to understand: What are you suspending?” Salamanca said.

New York City Corporation Counsel Sylvia Hinds-Radix also did not offer much in the way of specifics when it comes to suspending land-use requirements.

“It does not suspend all our city laws, but just the land-use laws,” she said, adding that more details would be “forthcoming.”

On Wednesday, Council Speaker Adrienne Adams and several other Council members put out a statement urging Hizzoner to consider vacant hotels as an option for housing migrants. The Daily News at the time requested a list of the hotels they were referring to, but the Council still has not made it public.

Before taking questions from reporters, Adams urged them to inquire with the Council as to why it has not yet released a list of potential hotels to house migrants.

“Can you ask the City Council where’s the list?” he said. “Cause we can’t get it. They said there were ten hotels that were available and we should be using them … People need to stop criticizing. They need to step up.”

Without calling out anyone by name, Adams also slammed Council members for demanding the city house migrants in hotels while at the same time telling his administration that they don’t want to house migrants in their Council districts.

“I cannot tell you how many Council people, local electeds that are yelling, ‘house people,’ but are saying ‘not in my district,’” the mayor said. “You can’t have it both ways.”

When asked about cooperation with the City Council and complaints that he provided little notice to Council members Diana Ayala and Marjorie Velazquez, who represent Randalls Island and Orchard Beach, respectively, Adams again appeared to point his finger back toward lawmakers, saying that his administration has been “communicating with them all the time on this.”

“There’s a deafening silence that’s coming from other parts of government,” he said. “This is not one of these operations where we can sit down and analyze what’s taking place. We had nine buses yesterday. We have eight buses today. We’re getting hundreds of people that are coming here, and it’s going to take real-time movement.”

In an ironic twist, the city’s Immigration Affairs Commissioner Manuel Castro suggested that many of the migrants in New York City could end up in Florida. That state’s governor, Ron DeSantis, also made waves weeks ago when he sent migrants to Martha’s Vineyard.

“The largest population of Venezuelans in the country are in Florida, and that’s where most people indicated where they wish to be,” he said. “It really is up to the individuals. We want to make sure that we support people getting to where they wish to go.”