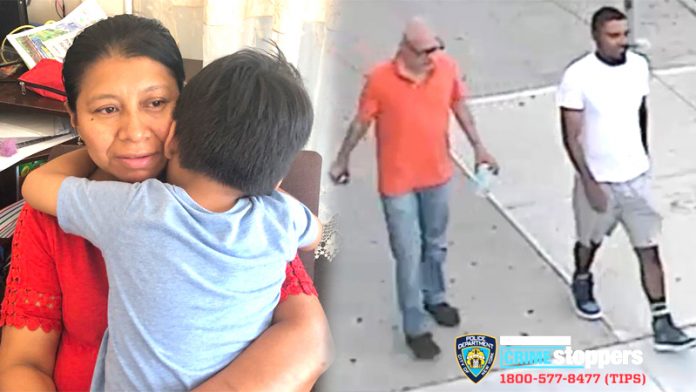 RICHMOND HILL, Queens – A mother speaks after pulling her 5-year-old son out of the hands of a kidnapper who had taken him from a sidewalk in Queens on Thursday.

Video shows the boy walking with his mother around noon. 20 on Hillside Avenue in Richmond Hill, a man got out of a red vehicle, picked up the boy and carried him into the car while the other suspect sat in the front passenger seat.

The boy’s mother, Dolores Diaz Lopez, saw it happen, reached out through the car’s open windshield and pulled her son away from the man and out of the car.

Diaz Lopez said she was walking with her children on her way to visit her husband at work when a man grabbed his son, Jacob.

She said her son initially sat in the back seat, but after she and her children asked them to give the boy back, he got up and she was able to grab him.

The suspects drove south on Hillside Avenue and then west on Jamaica Avenue.

“I do not know why it happened. I have never seen these people,” Diaz Lopez said.

She explained in Spanish that a mother’s instinct was what made her fight and act differently.

“You have to do what is necessary, no matter what,” he said. “The car was just parked there. I would never have imagined a man getting out of the car and grabbing my son. You should always be aware of your surroundings and not be on your phone.”

The child was not injured and the motive remains a mystery.

The vehicle is described as an older model reddish brown 4-door sedan.