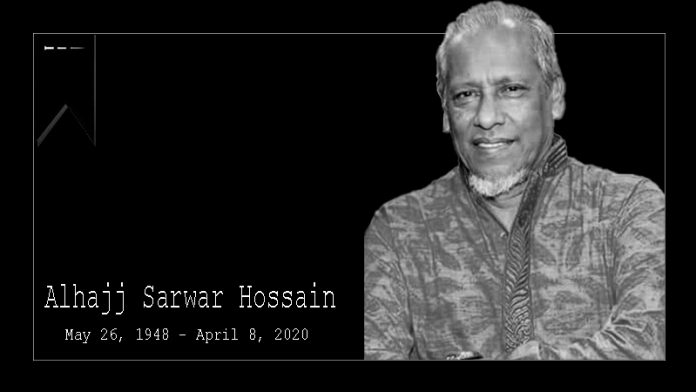 Lawyer Sarwar Hossain is the father of Jamil Sarwar Jonny, an officer of NYPD detective branch.

Today is the first death anniversary of Alhajj Sarwar Hossain, a senior lawyer of Pirojpur District Judge and Sessions Court. The Pirojpur immigrants and Bangladeshi community in New York has paid tribute to the death anniversary.

Alhajj Sarwar Hossain is a US citizen. Last year he was with his son in New York. Detective Jamil Sarwar came to Bangladesh on vacation. He left his wife and daughter in Bangladesh and returned to New York with his parents to join the work. While on professional duty, detective Jamil contracted with coronavirus. Unknowingly, Sarwar Hossain has contracted from his coronavirus positive son.

After being taken to hospital in a critical condition, Advocate Sarwar Hossain died at noon local time on Wednesday. He was buried in the Washington Memorial Muslim Cemetery on Long Island, New York.

Advocate Sarwar Hossain was a senior lawyer in Pirojpur. His wife Renu Sultana is a retired Principal of Pirojpur Government College. They became immigrants to the United States. He was the general secretary of Pirojpur Human Rights Organization, the President of Bangladesh Mentally Handicapped Welfare Association and was involved with many other organizations.❐