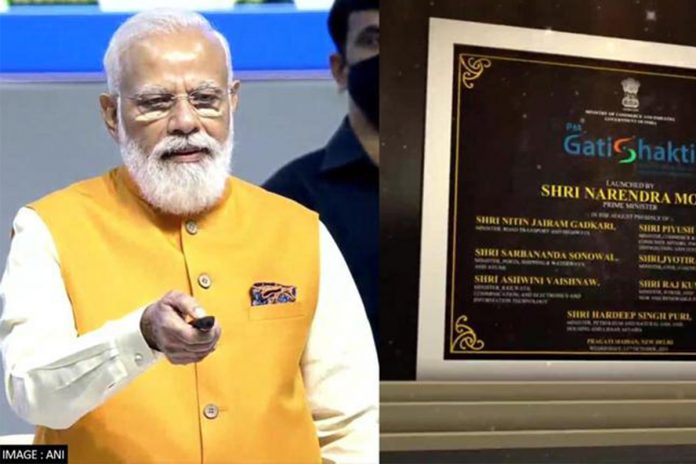 The plan aims to lend more power and speed to projects by connecting all concerned departments on one platform, he said, adding the infrastructure schemes of various ministries and state governments will be designed and executed with a common vision.

Unveiling the 100 lakh crore ‘Gati Shakti National Master Plan’ on Wednesday, Prime Minister Narendra Modi said that this was a step towards increasing efficiency by connecting all concerned departments on one platform. In the past, taxpayers’ money was ‘insulted’ through a lethargic approach to development work, the Prime Minister said, adding that the new plan aims to change that. Development, he said, is not possible without quality infrastructure and the government has now resolved to develop it in a holistic manner.

The aim of the new plan is to target to cut logistic costs, increase cargo handling capacity and reduce the turnaround time, Modi said at the inauguration function. It seeks to provide integrated and seamless connectivity for the movement of people, goods and services from one mode of transport to the other.

The plan will lend more power to and speed up projects by connecting all concerned departments on one platform, PM Modi said, adding that infrastructure schemes of various ministries and state governments will be designed and executed with a common vision.

Gati Shakti joins different departments for the coordinated development of projects from road to railways, aviation to agriculture, the Prime Minister said.

Stating that high logistics cost in India at 13 per cent of GDP was impacting competitiveness in exports, he said PM Gati Shakti is aimed at reducing logistic cost and turnaround time. With this, India will become a more attractive investment destination, PM Modi said.

The Prime Minister said the speed and scale of growth under his government was never seen in the previous 70 years of independence. “What was done in 27 years, we are doing in it in less than half that time,” he said.