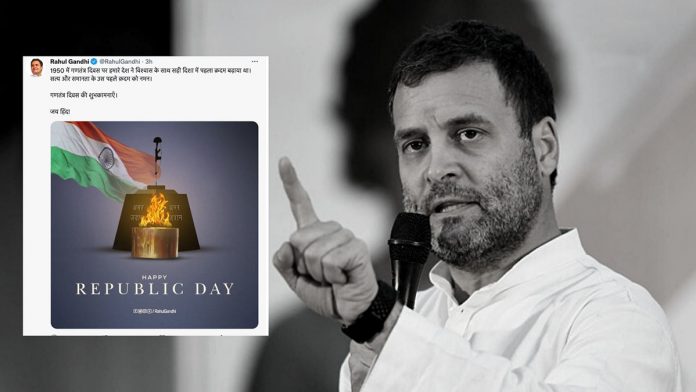 New Delhi: Rahul Gandhi’s Republic Day greetings on Twitter highlighted the Amar Jawan Jyoti or eternal flame at India Gate, which has now been merged with the one at the National War Memorial.

“On Republic Day in 1950, our country took the first step in the right direction with confidence. Salute to that first step of truth and equality. Greetings on Republic Day. Jai Hind,” the Congress leader tweeted.

He posted the tweet with an image of the eternal flame, which was extinguished at India Gate after 50 years and merged with the National War Memorial flame, 400 metres away.

The move was criticized by many, including the Congress and other opposition parties.

“It is a matter of great sadness that the immortal flame that used to burn for our brave soldiers will be extinguished today,” Rahul Gandhi had said in a tweet.

“Some people don’t understand patriotism or sacrifice. We will once again light the Amar Jawan Jyoti for our soldiers,” he wrote.

The government emphasized that the flame was not being extinguished and that a “lot of misinformation” had been circulated.

“The flame of the Amar Jawan Jyoti is not being extinguished. It is being merged with the flame at the National War Memorial. It was an odd thing to see that the flame at Amar Jawan Jyoti paid homage to the martyrs of the 1971 and other wars but none of their names are present there,” said government sources.

The India Gate was built by the British as a memorial to the soldiers of the British Indian Army who died in World War-I. The Amar Jawan Jyoti was placed under the India Gate after the India-Pakistan war of 1971, when the Indira Gandhi-led Congress government was in power.

“The names of Indian soldiers who died in wars after Independence, including the 1971 war, are engraved at the National War Memorial, said the government. “It is a true shraddhanjali (tribute) to have the flame paying tribute to martyrs there,” said the government.