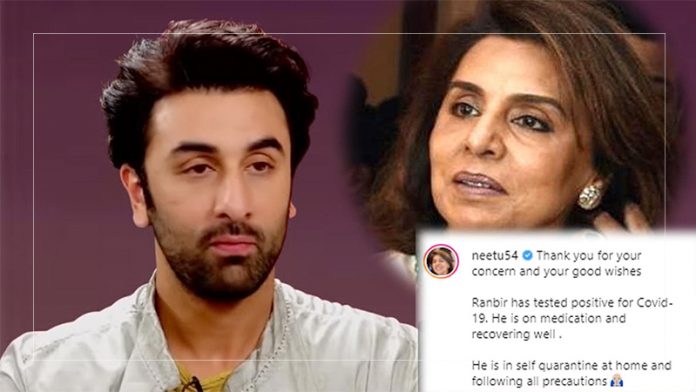 The ongoing Coronavirus outbreak has affected the entire world and almost everything is shut. People have self quarantined themselves and are taking precautions to stay safe from this deadly virus.

A lot of celebrities from Hollywood and Bollywood have shared messages and videos on their social media to spread awareness amongst the fans.

Recently, Ranbir Kapoor’s mother Neetu Kapoor shared a post related to Coronavirus on her Instagram. Her post read, “Planet Earth: closed for repairs”. She shared the picture with sad emoticons.

Well, her post is truly an eye-opener and it does give us a reality check.

To contain the spread of novel coronavirus, film bodies in India including Federation of Western Indian Cine Employees (FWICE), Indian Film & Television Directors’ Association (IFTDA) and Producers Guild of India on Sunday decided to put shootings of films, TV shows and web series on hold from March 19 to March 31.

Various events, award functions, interviews, shooting schedules have been called off in view of the novel coronavirus outbreak.

Akshay Kumar-starrer ‘Sooryavanshi’ has been pushed further which was slated to release in March. However, makers of ‘Angrezi Medium’, starring Irrfan Khan, Kareena Kapoor Khan, Radhika Madan and Deepak Dobriyal, went ahead with the scheduled release of the film on Friday. Though the makers might re-release the film once the situation gets better.❐

‘Bittu’ advances to next round in Oscars race