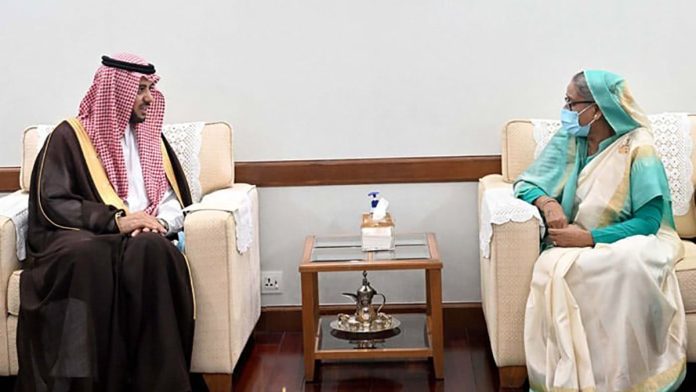 According to BSS, the visit of the Saudi crown prince would be a landmark event in the history of bilateral relations between Bangladesh and Saudi Arabia leading to the consolidation of ties, especially in trade and commerce, investment and economic cooperation.
Saudi Ambassador to Bangladesh Essa Yussef Essa Al Duhailan revealed the information when he paid a courtesy call on Prime Minister Sheikh Hasina at Ganabhaban in Dhaka on Saturday.

The envoy stated that it would be the first-ever visit of any Saudi Crown Prince to Bangladesh after 1985 when the then Saudi Crown Prince Abdullah bin Abdulaziz visited Dhaka. “So, this visit will be very significant for both the countries and the date and schedule of the visit will be fixed through diplomatic channels,” Essa Yussef was quoted as saying.

Now the foreign ministries of both countries will remain seized in working out the modalities of the visit.

A good number of bilateral instruments — MoUs and agreements—will be signed during the visit of the Saudi Crown Prince, which would strengthen the bilateral ties between the two countries significantly, the envoy hoped.

Describing the bilateral relations between Bangladesh and Saudi Arabia as special, Sheikh Hasina said this bilateral engagement would be further strengthened and expanded to new areas of collaboration with the visit of the Saudi Crown Prince.

In reply, the envoy said that Saudi Arabia enjoys a special place in the hearts of Bangladeshi people. “Our relations are growing from higher to higher over time,” he said.

She stated that Bangladesh is ready to allocate special land in Bangladesh for Saudi entrepreneurs, especially in the Mirsarai special economic zone and also an exclusive economic zone in the country’s southern region.

The premier further added that the purchasing power of Bangladeshi people has gone up. If Saudi Arabia makes investments here, it will get a good return, she said assuring that Saudi investment will receive all-out support from the Bangladesh government.

In response, the Saudi Ambassador appreciated the gesture from the prime minister saying that he would suitably brief the relevant authorities in Saudi Arabia. He further apprised the meeting that there are indeed some Saudi investment initiatives going on in Bangladesh.

“We’re working hard to make an effective collaboration between the two Muslim brotherly countries,” he was quoted as saying.

The diplomat said the Saudi investors are keenly interested to participate in the mega projects of Bangladesh.

He said last month the Saudi Prince allocated more than US$ 10 billion fund for the implementation of mega projects in five countries. Bangladesh could be one such country to benefit from Saudi investment if such funds come for its mega projects. “This is a huge area of cooperation unexplored,” he added.

In response, the prime minister appreciated the increasing interest from Saudi Arabia to invest in the mega projects in Bangladesh.

Sheikh Hasina said Bangladesh has been maintaining friendly relations with all the Muslim countries including Saudi Arabia for the greater welfare of the Muslim Ummah as well as the people of Bangladesh.

The Saudi diplomat lauded the leadership of Sheikh Hasina particularly for giving shelter to 1.1 million displaced Rohingya people despite having many limitations. “It is so generous (gesture)” he was quoted.

He assured that Saudi Arabia supports the stance of Bangladesh over the Rohingya issue in the international forums.

Sheikh Hasina said Bangladesh is facing various problems caused by the long stay of Rohingya. “It is a big burden for Bangladesh,” she was quoted.

Prime Minister then floated the idea of setting up fertiliser factories in Saudi Arabia as joint ventures between Bangladeshi and Saudi investors.

In response, the Saudi envoy said, “We need to work on the proposal.”

During the meeting, the Prime Minister made the proposal to allow Bangladesh to purchase oil, both crude and refined with a deferred payment schedule. “If Saudi Arabia considers the proposal, it would be better for us to meet the demand of the growing industries. We need some support,” she was quoted.

Sheikh Hasina asked the Saudi envoy to convey her sincere thanks and greetings to the King of Saudi Arabia and the Custodian of the Two Holy Mosques His Majesty Salman bin Abdulaziz Al Saud.

Ambassador-at-Large Mohammad Ziauddin and Prime Minister’s Principal Secretary Dr Ahmad Kaikaus were present during the call-on by the Ambassador.