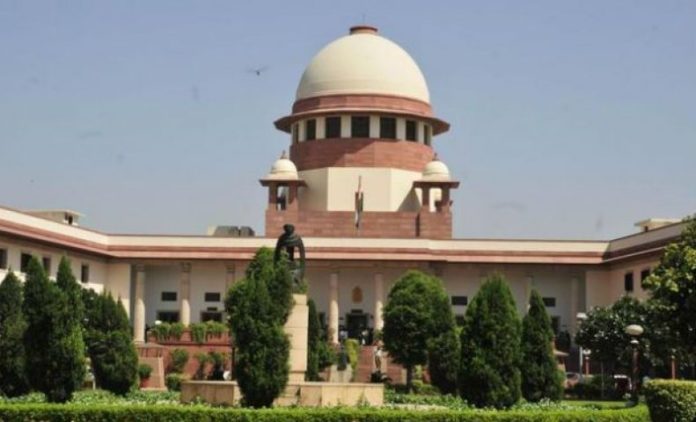 Hindustan Surkhiyan Desk:Amid tense situation in Jammu and Kashmir, the Supreme Court on Monday adjourned hearing of pleas challenging the validity of Article 35-A of the Constitution that grants special privileges to the residents of the state.

The State government had on Friday moved an application before the top court and sought to defer the hearing of the case, citing upcoming panchayat and urban local body elections.

The same is being protested by the separatist groups in the state, who have called for a two-day strike in the valley from August 5 against what they called serious challenge to Article 35A of the constitution.

Speaking on the same, moderate Hurriyat Conference chairman Mirwaiz Umar Farooq had tweeted, “RL (Joint Resistance Leadership) met to deliberate serious challenge posed to Art (Article) 35A, want to make it clear to GOI (Government of India) any and every attempt made at changing the demographic nature of the state will be stiffly resisted”.

Earlier in May, the top court had deferred the hearing of the case, saying that the government-appointed interlocutor, Dineshwar Sharma, is making efforts to find a solution; in such a situation, passing an interim order could prove futile.

The Union government decided not to file a counter affidavit in order to leave the Supreme Court free to decide on what is essentially an interpretation of the law and the Constitution.

Article 35-A was incorporated into the Constitution by a presidential order in 1954, stating, all those living in Jammu and Kashmir at that time and also those who lived in the state for 10 years anytime since, would be considered as its permanent residents.

These residents have been issued a certificate, which entitle them to special benefits in employment etc, and the biggest advantage being- only the permanent residents have the right to own and buy property in the state.

A non-governmental organisation, We the Citizens, filed a petitioned in the apex Court in 2014 to abolish the law on the grounds that it was “unconstitutional”.

There are apprehensions, among sections of Kashmiris, that if the law is repealed or diluted, outsiders would be settled in Jammu and Kashmir.

The matter of 35-A has united Kashmiri separatists and mainstream politicians.

The government and the top court, on the other hand, are treading rather cautiously in dealing with the sensitive issue.