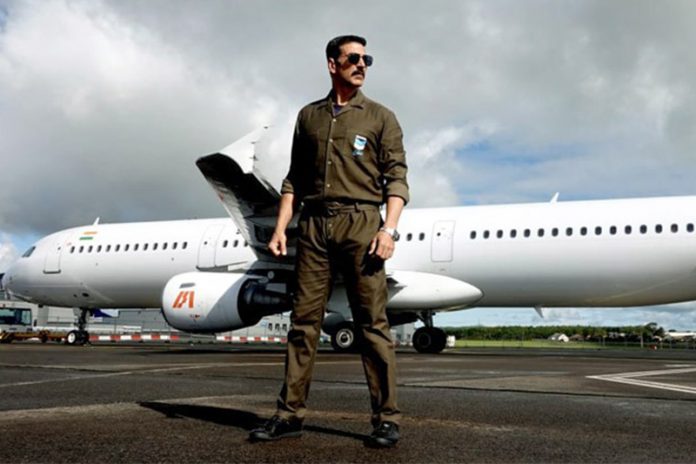 t is simple protocol that RAW agents have to be known by a code name, in order, of course, to keep their identity a secret. Akshay Kumar’s Anshul instinctively opts for ‘Bell Bottom’ during his training. He is literally thrust into RAW, at a time when India is grappling with back-to-back hijacks, the inevitable hostage negotiations that follow and the ultimate freeing of captured terrorists along with crores of money to ensure no lives are lost. It is the 80s, Indira Gandhi (played by Lara Dutta) holds the Prime Ministers’s chair, with her trusted aide, RN Kao (Denzil Smith) by her side.

Akshay Kumar has flair. And sometimes a bit extra too. Even though Anshul wasn’t meant for or didn’t intend to come into this line of work, he seamlessly fits right in. Director Ranjit Tewari (of Lucknow Central fame), however, doesn’t go full out sprinkling the trademark Akki charm on us; he tries hard to keep the flamboyance of Akshay, the actor, and buoyancy of Akshay’s gait – swishing the hem of his extra-flared bell-bottoms – in check. Which is why perhaps the only whistle-worthy dialogue in the film – something about a dog, daddy and RAW – was given to Adil Hussain, to be delivered in his deadpan humour. This bottom-of-the-barrel dialogue, however, should have been entirely avoided. But a Bollywood masala movie director can do only so much; ultimately the slow-motion shots take over.

ADVERTISEMENT
The first half of the film is spent in establishing the premise, laboriously, if you may. Anshul is given a backstory to justify he has vested interest in cracking the hijacking case at hand, and isn’t doing so simply for the country. Vaani Kapoor and Akshay even get a song – Marjaawan – the only one that makes it to the screen, apart from Tum Aaogey at the very end, to establish his earnestness. In the process, the actual mission of freeing the hijacked hostages is pushed (read cramped) to the second half.

Pakistan is still the enemy in 1983 – not much has changed between 1971 in Bhuj The Pride Of India and 1999 in Shershaah. A master move sends Pakistan into a frenzy. If only Indo-Pak relations, the hijackings, and international affairs were that simple.

Anshul has a plan, and then a backup and then a backup ka bhi backup because mummy kehti thi. And thus we have about 20 minutes of adrenaline-pumping suspense, hand-to-hand combat, but no bloodshed because Dubai ki mitti mein khoon nahi baha sakte. Like the crease of those crisp bell-bottoms Akshay dons, everything falls into place in a straight line. Even those that don’t, are so predictable that you see it coming like the Indian Airlines Flight 405 – one of the many hijacks this inspired-by-true-events (for example, the IC 814 hijacking) film borrows from.