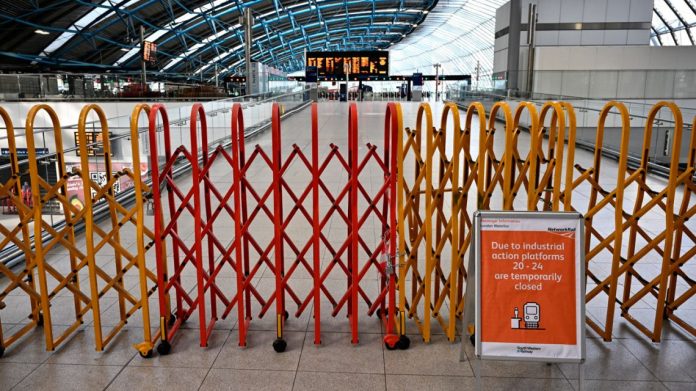 Britain’s railway system once again came to a virtual standstill on Saturday as union workers staged their third walkout of the week in strike action billed as the biggest in decades.

Tens of thousands of rail workers staged the latest day-long walkout over pay and job security, hampering weekend plans for those already hit by strikes on Tuesday and Thursday.

Only around a fifth of services are set to operate on heavily reduced hours, with those still running starting much later in the morning than usual and set to end as early as 6:30 pm.

The RMT rail union insists this week’s actions are necessary as wages have failed to keep pace with UK inflation, which has hit a 40-year high and is on course to keep rising.

It also wants a threat of compulsory redundancies withdrawn.

RMT general secretary Mick Lynch said its members are ‘standing up for all working people trying to get a pay rise and some job security’.

‘In a modern economy, workers need to be properly rewarded for their work, enjoy good conditions and have the peace of mind that their job will not be taken away from them,’ he added.

With Britain suffering from rocketing inflation and stagnant economic growth, the industrial

action—which could be mirrored by workers in other sectors over the summer—has echoes of the 1970s.

Then, the country was crippled by a wave of strikes across various industries while struggling with rampant price rises and non-existent growth, a toxic combination known as stagflation.

Network Rail chief executive Andrew Haines said: ‘Unfortunately, the RMT’s decision to carry out another day of needless and premature strike action means our passengers will suffer again on Saturday.

‘A fraction of trains will run compared to a usual Saturday service, with trains starting later in the morning and finishing much earlier in the evening.’