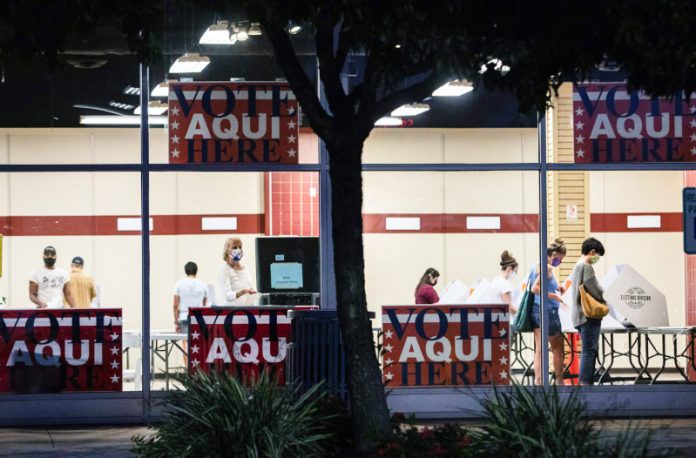 With four days remaining in the US presidential campaign, more than 85 million Americans have cast ballots, including 9 million in Texas, where the secretary of state’s office on Friday said early voting had eclipsed total turnout from 2016.

Early voting has been setting records across the United States, with nationwide turnout passing 60 per cent of the 2016 total, according to the US Elections Project at the University of Florida. But Texas is just the second state, after Hawaii, to break the full-year record before Tuesday’s Election Day.

The unprecedented level of early voting reflects both intense interests in the contest between Republican President Donald Trump and Democratic challenger Joe Biden, as well as a desire on the part of many voters to avoid exposure to the coronavirus in crowds on Tuesday.

More than 20 million Americans who had voted early as of Friday did not vote in the 2016 election, according to TargetSmart, a Democratic analytics firm.

Friday is the final day of early voting in several states across the country, including Georgia and Arizona.

Texas, the nation’s second most populous state, hasn’t voted for a Democrat for president since 1976, but opinion polls show Joe Biden is leading among the voters who have helped set the unprecedented early vote levels. Polls also show Biden effectively tied with Trump in Texas, whose 38 Electoral College votes make it a prize for either candidate seeking the 270 minimum votes needed to win.

Harris County, the state’s biggest, which includes Houston and has become a Democratic stronghold in recent years, opened eight 24-hour voting locations on Thursday, helping boost the turnout numbers to their record level on Friday.

The Trump campaign has cited its own internal analysis that it said showed the president is ahead by hundreds of thousands of votes among early ballots. Trump won Texas by a 9-percentage-point margin in 2016, when total turnout reached 8,969,226, according to the secretary of state.

Biden’s running mate, US Senator Kamala Harris of California, is scheduled to visit Texas on Friday. Billionaire Michael Bloomberg plans to spend $15 million in the state and Ohio in a last-minute bid to flip both Republican-leaning states.❐