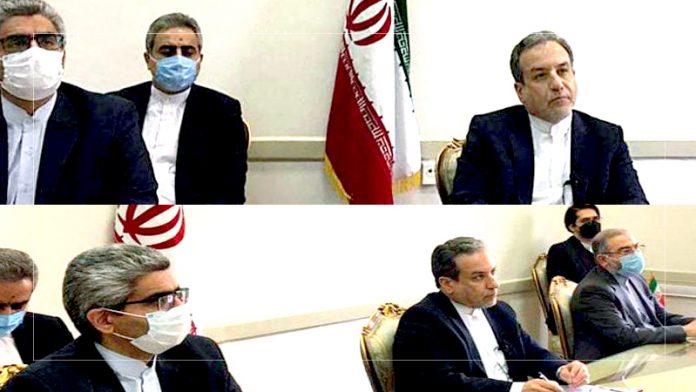 The United States and Iran said Friday they will begin indirect negotiations with intermediaries next week to try to get both countries back into compliance with an accord limiting Iran’s nuclear program, nearly three years after President Donald Trump pulled the U.S. out of the deal.

The announcement marks one of the first bits of tangible progress in efforts to return both nations to terms of the 2015 accord, which bound Iran to restrictions in return for relief from U.S. and international sanctions.

President Joe Biden came into office saying that getting back into the accord and getting Iran’s nuclear program back under international restrictions was a priority. But Iran and the United States have disagreed over Iran’s demands that sanctions be lifted first, and that deadlock has threatened to become an early foreign policy setback for the new U.S. president.

Trump pulled the U.S. out of the accord in 2018, accusing Iran of continuous cheating and opting for what he called a maximum-pressure campaign of stepped-up U.S. sanctions and other tough actions. Iran responded by intensifying its enrichment of uranium and building of centrifuges in plain violation of the accord, while maintaining its insistence that its nuclear development was for civilian and not military purposes.

Israel, Saudi Arabia and other U.S. allies and strategic partners are on perpetual alert against the possibility of their top rival, Iran, attaining nuclear arms, keeping tensions up in a region where the U.S. military is present and has often intervened.

Iran’s enrichment was seen as upping the pressure for a U.S. return to the nuclear deal and a lifting of Trump’s sanctions, which included banking measures aimed at cutting off the country from the international financial system. Other Trump administration measures sanctioned Iran’s oil sales and blacklisted top government officials.

Agreement on the start of indirect talks came after the European Union helped broker a virtual meeting of officials from Britain, China, France, Germany, Russia and Iran, all of which have remained in the accord, known as the Joint Comprehensive Plan of Action.

Price said next week’s talks will be structured around working groups that the European Union was forming with the remaining participants in the accord, including Iran.

The United States, like Iran, said it did not anticipate direct talks between the two nations now. Price said the United States remains open to that idea, however.

Russia’s ambassador to international organizations in Vienna, Mikhail Ulyanov, said “the impression is that we are on the right track, but the way ahead will not be easy and will require intensive efforts. The stakeholders seem to be ready for that.”

Events since Trump pulled out of the deal complicate the United States’ return.

Iran since the U.S. withdrawal from the pact has been steadily violating its restrictions, like the amount of enriched uranium it can stockpile and the purity to which it can enrich it.

The International Atomic Energy Agency has said that over the past two years, Iran has accumulated extensive nuclear material and new capacities and used the time for “honing their skills in these areas.”

Iran in January increased uranium enrichment at its underground Fordo facility to 20% levels. That puts Tehran a comparatively easier technical step away from weapons-grade levels of 90%. Iran now has enough low-enriched uranium to convert to a higher level of enrichment and make a bomb.

Iran insists it is not seeking to make nuclear bombs.

Iran has said that before it resumes compliance with the deal, the U.S. needs to return to its own obligations by dropping the sanctions.

As part of its ongoing violations of the deal, Iran last month began restricting inspections of its nuclear facilities. Under a last-minute agreement worked out during a trip to Tehran, however, some access was preserved.

Under that temporary agreement, Iran will no longer share surveillance footage of its facilities with the International Atomic Energy Agency but has promised to preserve the tapes for three months. It will then hand them over to the Vienna-based U.N. atomic watchdog if it is granted sanctions relief. Otherwise, Iran has vowed to erase the tapes, narrowing the window for a diplomatic breakthrough.

In the U.S., conservatives have pushed the Biden administration to broaden talks to address other complaints against Iran, including its crucial support to armed groups in Lebanon, Iraq, Yemen and Syria and its detention of American citizens, as a condition for lifting sanctions. The administration has pledged in principle to push Iran on those matters, but State Department spokespeople on Friday declined to say if or when those additional points of friction might be raised in resumed talks.❐