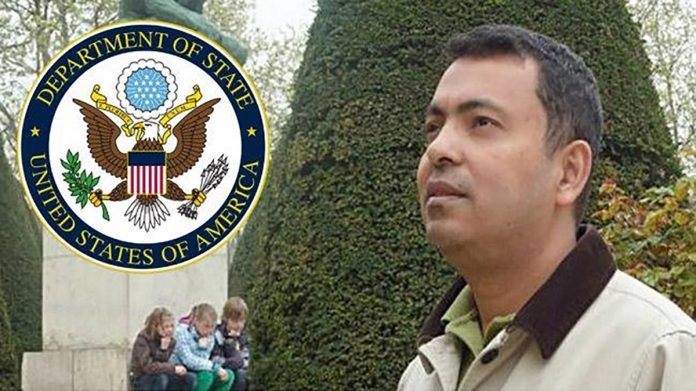 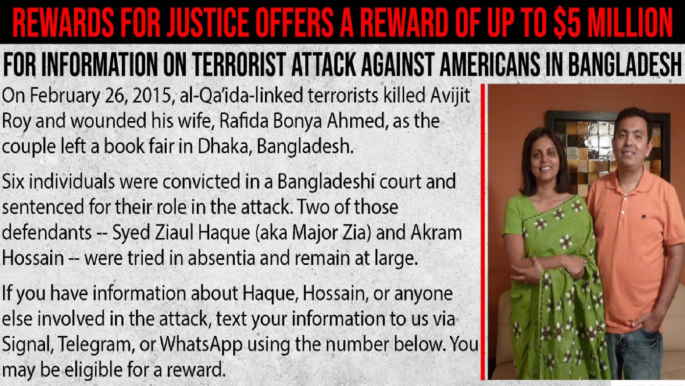 The United States government has announced a reward of up to $5 million for information on two absconding convicts – major Syed Ziaul Haque aka Major Zia and Akram Hossain alias Abir, in the murder of American-Bangladeshi writer-blogger Avijit Roy.

US Department of State announced the reward under its Rewards for Justice programme on Monday (20 December).

Reward! Up to $5 Million for Information
On Attack Against Americans in Bangladesh

If you have info on those responsible for this heinous attack, text us at the number below. pic.twitter.com/cB26VVBKve

Sources in Bangladesh’s Counter Terrorism and Transnational Crime (CTTC) have said that Major Zia is on the run and they are unaware of his location.

Avijit Roy, who was a bio-engineer, online activist and a naturalised US citizen, was hacked with machetes by several militants near the main entrance of Suhrawardy Udyan, adjacent to the TSC intersection at Dhaka University, around 8:30pm on 26 February, 2015.

He died at Dhaka Medical College Hospital around 10:30pm.

Avijit’s wife Rafida Ahmed Bonya was also severely wounded in the attack but survived. The couple was leaving the Amar Ekushey Book Fair when they came under attack.

Four years later, police filed a charge-sheet against the six in March 2019. The tribunal accepted it the next month. The trial started in August that year following the indictment of the accused.

During the trial, the court heard 28 prosecution witnesses, including Ajay Roy, who passed away on 9 December 2019.

A total of six individuals were charged, tried, and convicted in Bangladesh. Two of the convicted conspirators, Syed Ziaul Haque (aka Major Zia) and Akram Hussain were tried in absentia and remain at large.

Around six years after the incident, a Dhaka court on 21 February of this year sentenced five leaders and members of banned militant outfit Ansar al-Islam to death and one to life imprisonment for killing Avijit Roy.

The US investigation into the murder is still open.