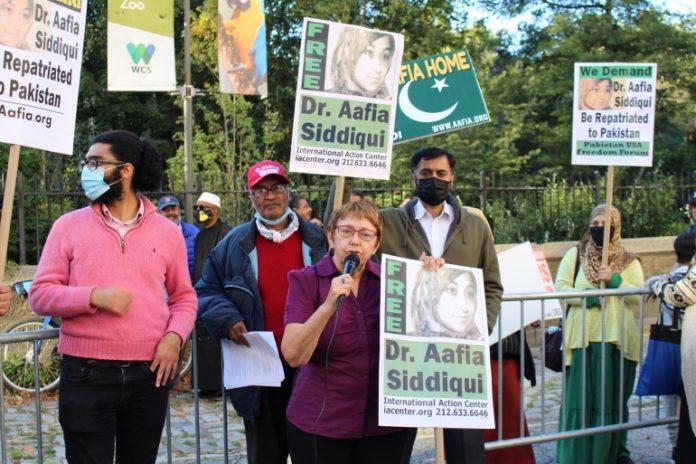 Dozens of protesters and human rights activists are calling on the Pakistani government to work to end the continued imprisonment of Pakistani neuroscientist Aafia Siddiqui in the United States.

Carrying pictures and banners, the protesters gathered outside the Pakistan Consulate in New York on Wednesday to decry Siddiqui’s situation and urge the Pakistani government to actively seek her immediate release and repatriate her.

The rally was part of a series of protests organised by a coalition of more than 20 local and national human rights and religious groups, including the Council on American-Islamic Relations (CAIR).

Similar protests have been planned in Boston and Washington, DC, in the coming weeks.

Who is Aafia Siddiqui?
Siddiqui, a US-educated-Pakistani national, was charged with attempting to kill US soldiers and FBI agents during interrogation after her arrest in 2008 in Afghanistan’s Ghazni province.

She was flown to the US and sentenced to 86 years in prison after a New York court found the 49-year-old mother of three guilty of attempted murder and assault in 2010.

Siddiqui earned her undergraduate degree from the Massachusetts Institute of Technology (MIT) in 1995 and a doctorate in neurosciences from Brandeis University in Boston before moving back to Pakistan in 2003.

According to her family, Siddiqui and her three children were abducted by the Pakistani intelligence agencies immediately after her return.

In 2008, she appeared in Afghanistan and was detained by the Afghan police, under suspicion of planning a suicide bomb attack and being in possession of notes on how to make chemical weapons and dirty bombs, accusations denied by the family and lawyers.

Currently, she is being held at Federal Medical Centre (FMC) prison in Fort Worth, Texas.