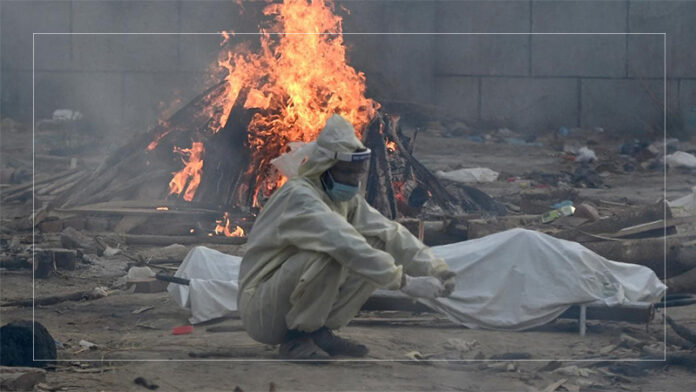 There is a split scenario unfolding as the world battles the pandemic.

In countries like the United States and the United Kingdom, jubilant, newly-vaccinated people hug their loved ones after a long period of separation. In India, distraught families count their dead.

Sick people are being turned away from hospitals that have run out of beds and oxygen, as the number of new cases rises to record levels each day, creating a national crisis with global repercussions.

The more the virus spreads, the more chances it has to mutate and create

The more the virus spreads, the more chances it has to mutate and create variants that could eventually resist current vaccines, threatening to undermine other countries’ progress in containing the pandemic, experts warn.

“If we don’t help in India, I worry about an explosion of cases” around the world, said Dr. Ashish Jha, dean of the Brown University School of Public Health.

That’s why India’s Covid outbreak is a global problem that needs a coordinated response.

US oxygen concentrators — medical devices that compress oxygen from the air — arrived earlier this week, and on Wednesday the UK, Italy and Germany committed more medical equipment, as Russian planes took off from Zhukovsky for Delhi carrying medicine, monitors and ventilators.

While the immediate priority is saving the lives of those already sick, vaccinating the country is considered crucial to stop the virus from spreading. But, despite being home to the world’s biggest vaccine producer, India doesn’t have enough doses, and there’s no fast and simple way to make more.

Western countries have been criticized for vaccine stockpiling, but on Wednesday, British Health Secretary Matt Hancock said the UK didn’t have any spare vaccines to send.

US President Joe Biden said on Tuesday he had spoken with Indian Prime Minister Narendra Modi and confirmed the US intends to send coronavirus vaccines to India. Earlier in the week, the US said it would share 60 million AstraZeneca doses with other countries, but didn’t specify which nations or when. Delivering them could take months, the White House warned.

An equitable distribution of the vaccine around the world is essential, said Dr. Anthony Fauci, director of the US’ National Institute of Allergy and Infectious Diseases.

“Because we’re all in this together. It’s an interconnected world. And there are responsibilities that countries have to each other, particularly if you’re a wealthy country and you’re dealing with countries that don’t have the resources or capabilities that you have,” he told The Guardian earlier this week.

If the Indian outbreak can’t be contained and spreads to neighboring countries with low vaccine supplies and weak health systems, experts warn the world risks replicating scenes witnessed in India — especially if newer, potentially more contagious variants are allowed to take hold. And, as India has a leading role in making vaccines for other nations, failing to stop its spread there could endanger the vaccine rollout worldwide.

Coronavirus was first detected in the Chinese city of Wuhan, and has since spread across the world from person to person, in some cases, mutating into new variants.

In December, scientists detected a new variant, known as B.1.617, in India, though it’s not known if this is driving the local outbreak owing to a lack of genomic surveillance.

Anurag Agrawal, director of the Institute of Genomics and Integrative Biology, said Friday there is a correlation, however, between the rising prevalence of variants and the surge in Indian case numbers.

“In Maharashtra we saw it (B.1.617) go up, we saw an outbreak. We are seeing it go up in Delhi, we are seeing an outbreak. These are very important epidemiological correlations,” Agrawal said.

But he noted in Delhi and in north India, another variant, first identified in the UK and known as B.1.1.7, was more dominant than B.1.617. The B.1.1.7 variant is known to be more transmissible.

Fauci said recent data showed that India’s homegrown Covid-19 vaccine, Covaxin, neutralized the B1.617 variant, which suggested that vaccinations could be used against it. “Vaccination could be a very, very important antidote,” he said, though he added that more information was being gathered each day.

Other variants, first identified by scientists in South Africa and Brazil, are also believed to be more transmissible than the original strain and have already made their way into several other countries.

So far, vaccines from Pfizer/BioNTech, Moderna Inc. and Johnson & Johnson have shown varying degrees of effectiveness against these variants. However, because the virus can mutate as it spreads, and there’s no guarantee the available vaccines will protect people from new variants.

This would leave no country protected, no matter how many of its people have been vaccinated.

“For selfish reasons, every country should be concerned about large outbreaks that are out of control,” Jha said. “Countries like the UK and the US are doing a great job with vaccinations, and they should be feeling great about it, but that’s only as good as variants that are out there.”

More than 142 million people in the US and 33 million people aged 18 and over in the UK have received at least one dose of the Covid-19 vaccines — around 43% and 64% of the eligible population, respectively.

By contrast, around 129 million people in India had received at least one dose of the vaccine, as of April 27, the Indian health ministry reported. That’s just over 8% of India’s total population. Experts have blamed a slow vaccine rollout and shortage of supply.

Epidemiologist Brahmar Mukherjee says India would need to administer 10 million doses a day to vaccinate all adults in the next five to six months. That is assuming enough doses are available.

Beyond the risk of new variants, India’s second wave of cases presents another, more immediate problem for the world.

The country is a major player in COVAX, the global vaccine-sharing initiative that provides discounted or free doses for lower-income countries.

India promised to supply 200 million COVAX doses that are being distributed to 92 poor countries. But its own rapidly worsening situation has prompted Delhi to shift focus from COVAX to prioritizing India’s own citizens.

The Serum Institute of India (SII) had already delivered 28 million doses of the AstraZeneca vaccine, COVAX said in a statement in March, but was due to ship another 90 million doses in March and April.

Those deliveries would be delayed, it warned, due to rising demand within India.

“I don’t think the global leadership has woken up to the scenario of how bad this delay can be for the world,” said Shruti Rajagopalan, a Senior Research Fellow at the Mercatus Center at George Mason University.

The moment India is short on vaccines and keeps its supplies for domestic purposes, it means other countries like South Africa and Brazil have to wait, she said. “You’re delaying the world getting vaccinated by many months,” Shruti added.

John Nkengasong, the director of Africa’s disease control body, warned earlier this month that India’s hold on exports could be “catastrophic” for the continent’s vaccine rollout.

Despite the disruption of Indian supplies, COVAX said it was on track to deliver all scheduled doses in the first half of this year, and by the end of the year expects to provide two billion doses.

The Indian experience underscored the importance of diversifying the supply chain, and COVAX was trying to make deals with more vaccine manufacturers, which would be announce soon, it said.

Before its own coronavirus crisis, India assumed a leadership position in the global effort to end the pandemic.

Prime Minister Narendra Modi promised millions of doses to the COVAX initiative, and earlier this year donated vaccines to other countries, including Guyana, Guatemala, the Seychelles and the Maldives.

The Prime Minister’s generosity, however, has not shielded him from public anger at home over his alleged role in exacerbating the domestic health crisis.

For example, Modi allowed a massive weeks-long Hindu pilgrimage to proceed with millions of attendees traveling across numerous states, and his political party held large rallies for upcoming elections in four states and one union territory.

The Prime Minister has acknowledged the scale of the crisis, and is trying to speed-up the nationwide vaccination program. From May 1, state governments and private providers will be allowed to vaccinate those who are 18 and older.

The cost of each vaccine dose is dropping too, after the Serum Institute of India (SII) said it would charge less per dose so the states can vaccinate more people. Effective immediately, each dose will cost Rs.300 per dose, down from Rs.400, the equivalent of a drop from $5.30 to $4 per dose, the SII said.

But with hundreds of thousands of new cases each day, India needs much more help to contain the outbreak.❐