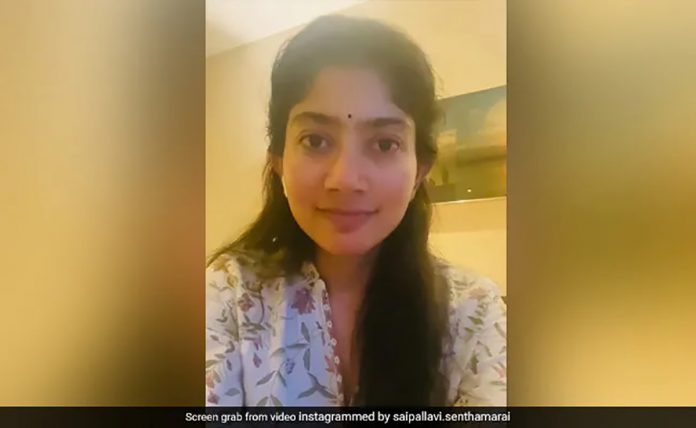 New Delhi: Actor Sai Pallavi today issued a clarification after her remarks in an interview on the exodus of Kashmiri Pandits in the 90s triggered a controversy on social media. During an interview to the YouTube channel Great Andhra, the actor had condemned violence in the name of religion and said that while the exodus of Kashmiri Pandits was wrong, so is cow vigilantism.

Sai Pallavi’s comments drew mixed reactions on social media. While some Twitter users applauded her courage, others trolled her. Several people also said that she was belittling the Kashmir tragedy.

In an Instagram video, the actor today said that she will think twice before speaking her heart.

“I will be thinking twice before I speak my heart because I am anxious that my words may be misinterpreted,” she said.

Sai Pallavi said that the movie ‘The Kashmir Files’ and the cow lynching incident had a huge impact on her and left her traumatised for days.

“I was disturbed after I watched the Kashmir files. I would never belittle a tragedy like the genocide and the generations of people that are still affected by it. Having said that, I can never to terms with a mob lynching incident that had taken place during Covid. I remember seeing that video and being shaken for days,” she said.

“I believe that violence in any form is wrong and violence in the name of any religion is a huge sin,” she added.

During the interview, the actor was also asked about her political inclination. She had said that she grew up in a neutral family and was taught to be a good human being.

Elaborating on her comments, she said, “I hope a day doesn’t come when a child is born, and he/she is scared of his/her identity.”

Sai Pallavi’s Telugu film “Virata Parvam” hit the theatres this week. The movie, which also stars Rana Daggubati, is inspired by true events from the 1990s. It chronicles a love story against the backdrop of the Naxalite movement in the Telangana region.