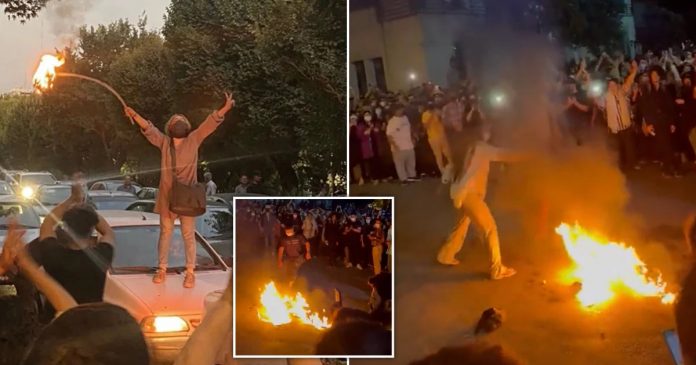 Women set fire to their headscarves as protests erupted across Iran in response to a woman dying in the custody of the country’s ‘morality police’.

Now taking to the streets for the fifth day running, the women of Sari, Mazandaran, ripped off, waved and set alight their hijabs in defiance.

Police responded to the dozens of women around the bonfire by firing tear gas at the women last night, BBC Persian reported.

According to video footage tweeted by 1,500 Images, an anti-government group, the women in Sari were in no way alone as dozens of similar protests broke out.

The demonstrations across dozens of cities amounted to a national outpouring of grief and anger at the death on Friday of Mahsa Amini, 22.

Activists claim Amini was beaten by police while being taken to a detention facility in a van causing serious injuries that led her to slip into a coma and die.

The Islamic religious police, an agency tasked with enforcing sharia law, has denied any wrongdoing and claimed she died from a heart attack.