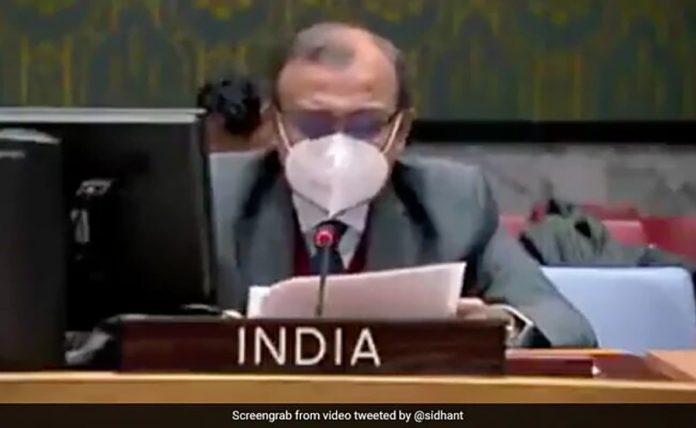 United Nations: The 26/11 Mumbai terror attacks epitomise the sheer scale and scope of urban warfare that India had to mount against jihadi terrorists, the country’s envoy to the UN has said, asserting that any debate on protection of civilians would be incomplete without taking into account the carnage wrought by terrorist forces, especially those backed by State actors, a thinly-veiled reference to Pakistan.

Addressing the UNSC Open Debate ‘Protection of civilians in armed conflict: Wars in cities – protection of civilians in urban settings’, India’s Permanent Representative to the UN Ambassador T.S. Tirumurti on Tuesday told the Council that the “dastardly” terrorist attacks in Mumbai in 2008, which resulted in the killing of 166 innocent civilians of 15 nationalities, is still a ghastly reminder to the entire international community.

India raises 26/11 at UNSC by terrorist "backed by state actors🇵🇰". India's envoy to UN @IndiaUNNewYork @ambtstirumurti says,"Mumbai Terror attacks epitomize the sheer scale & scope of urban warfare that we had to mount against Jihadi terrorist" pic.twitter.com/UqmqjxCfsu

“Having suffered the scourge of cross border terrorism for decades, India has always been at the forefront of global counter-terrorism efforts. We have witnessed dastardly terrorist attacks on our cities targeting innocent civilians. Any debate on protection of civilians in urban areas would be incomplete without taking into account the carnage wrought by terrorist forces, especially those backed by State actors,” said Mr Tirumurti.

Hafiz Saeed-led Jamaat-ud-Dawah (JuD) is the front organisation for the Lashkar-e-Taiba (LeT) which is responsible for carrying out the Mumbai terror attacks. Saeed has been serving jail sentence at the Kot Lakhpat Jail, Lahore in Pakistan for his conviction in terror financing cases.

“In recent memory, the Mumbai terror attacks epitomise the sheer scale and scope of urban warfare that we had to mount against jihadi terrorists, when our police personnel had to put their lives on the line to secure the city’s safety,” he said.

He underlined the need for international community to stand firm on its opposition to terrorism in all its forms and manifestations, and reject any attempt to provide any justifications for terrorist acts.

“We should remember that the consequences of any relaxation of our guard on this count would be borne not only by civilians but even by the security forces which combat them in extremely difficult conditions in urban areas.

“We have already seen implications of such an approach in Europe, where lone wolf attacks have resulted in killings of civilians in urban areas and terrorising the urban populations,” Mr Tirumurti said.

Mr Tirumurti noted with concern that the world is already witnessing the effect of urban warfare and terrorist attacks in cities.

According to the Secretary General’s report, more than 50 million people were affected by conflict in urban areas.