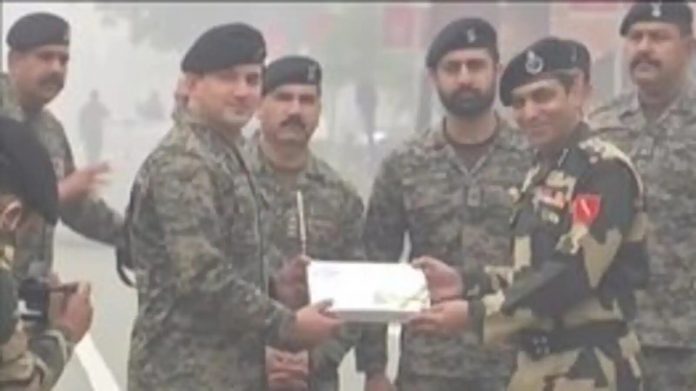 Amritsar: In a goodwill gesture, Border Security Force (BSF) and Pakistan Army exchanged sweets and greetings at the Attari-Wagah border on the 73rd Republic Day on Wednesday.

The Inter services Guards was formed by 7 Soldiers from each service. This year, the guards were commanded by a Naval Officer, Lt Cdr Amit Kumar Rathi. The Contingent commander was Sqn Ldr Akash Gangas.

Later, PM Modi and other dignitaries will head to the saluting dais at Rajpath to witness the Republic Day parade.

To mark the occasion, the Ministry of Defence has conceptualized a series of new events during the main parade on Rajpath on January 26 and the ‘Beating the Retreat’ ceremony at Vijay Chowk on January 29.

It has been decided that the Republic Day celebrations will now be week-long from January 23-30 every year. This year, the celebrations commenced on January 23, the birth anniversary of great freedom fighter Netaji Subhas Chandra Bose, and culminate on January, 30 which is observed as Martyrs’ Day.