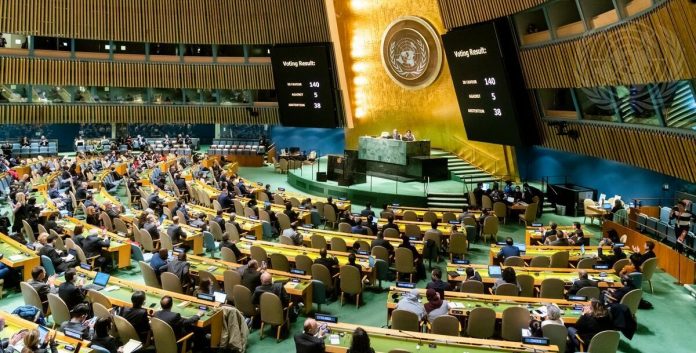 Bangladesh has voted in favour of a resolution brought in the United Nations’ General Assembly against Russia’s illegal annexation of four Ukrainian regions and demanding immediate handover of these to Ukraine.

Bangladesh voted for the resolution on Thursday based on the fundamental principles of UN Charter including respect for sovereignty and territorial integrity.

A total of 143 states supported the resolution during the 11th emergency special session of the United Nations in New York. Meanwhile, five countries voted against the resolution and 35 countries abstained.

The overwhelming adoption of the latest UN resolution reflected a strong message of global opposition to Russia’s attempts of annexing territories of neighboring Ukraine in the war running for seven months.

Three resolutions have been adopted in the United Nations since Russia-Ukraine war broke out in last February. Apart from this, a proposal of revoking Russia’s membership from the United Nations Human Rights Council has been raised in Geneva as well.

Among the four United Nations resolutions, Bangladesh had voted in favour of the humanitarian-aid related second resolution. However, Bangladesh abstained from voting at the first resolution and at the human rights council.

During Thursday’s voting India, Pakistan and Sri Lanka abstained from voting while other five countries of the South Asian region including Bangladesh voted in favour of the resolution.

Moscow organised a referendum on the annexation of four Ukrainian regions of Donetsk, Kherson, Luhansk and Zaporizhzhia into Russia. Later, Russia annexed those four regions of Ukraine.

Following Russia’s decision, the resolution was proposed at the United Nations on 7 October. More than 50 countries supported the resolution. Negotiations on this issue began on 10 October, and when Russia proposed a secret ballot at the beginning of the negotiations, 107 votes were cast against it, resulting in the proposal being rejected.

Voting on the resolution titled ‘Territorial Integrity of Ukraine: Defending the Principles of the UN Charter’ was held on Thursday (13 October) around Bangladesh Time 2.00pm.

Muhammad Abdul Muhith, permanent representative of Bangladesh to the United Nations highlighting the reasoning behind Bangladesh voting in favour of the resolution said, “Bangladesh strongly believes that the purposes and principles of the UN Charter regarding respect for sovereignty and territorial integrity, and peaceful settlement of international all disputes must be complied universally for everyone, everywhere under all circumstances, without any exception.”

He further added, “Bangladesh believes that the sovereignty and territorial integrity of any country within its internationally recognised borders should be respected. In this connection, we specially underscore the need to take similar uniform stand by the international community against the annexations of Palestinian and other Arab lands by Israel.”

“Bangladesh remains deeply concerned by the continuation of the conflict in Ukraine and its global socio-economic implications. We believe that antagonism like war or economic sanctions, counter-sanctions cannot bring good to any nation. Dialogue, discussion and mediation are the best way to resolve crises and disputes,” added Abdul Muhith referring to Bangladesh’s concern about the ongoing crisis.

While fully supporting Ukraine’s territorial integrity, the resolution also condemned Russia strongly for organising the referendum. At the same time, the referendum was declared illegal.

In addition, all countries, organisations and specialised agencies of the United Nations have been called not to recognise the occupied territories of Ukraine.

The resolution urging Russia to revoke all of its decisions and withdraw its military from Ukraine said, “Those decisions are opposite of Russia’s territorial integrity and sovereignty as well as inconsistent with the UN Charter.”

While talking to Prothom Alo on Thursday, former foreign secretary and Bangabandhu Chair of Delhi University Md Shahidul Haque said, “Bangladesh strongly believes in the UN Charter. Territorial integrity, sovereignty and non-interference as declared in the UN Charter, are our fundamental principles. We have decided to vote for it as it is consistent with our fundamental principles. If there’s any sort of violation to that policy, we protest.”