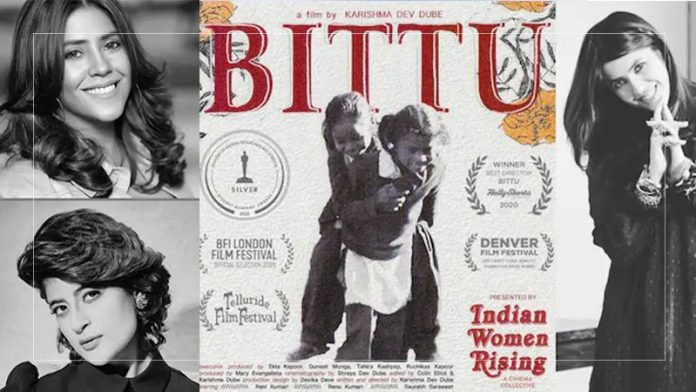 A big surprise in the life of the unit. “Bittu” has taken its place, and the selection process is proceeding carefully with regard to the 93rd Academy Awards. There, Bittu is in the Live Short Film category in the top 10.

Although “Jallikattu” was nominated for Malayalam, it was removed from the Oscar category for foreign films. But that race has gone ahead, Karishma Dev’s short film “Bittu”

;. This movie was nominated in the Live Short Film category.
Now let’s talk about Bittu. Rani Kumari and Renault Kumari worked in this movie based on real events. Nevertheless, Ikta Kapoor, Junit Munjar, Roshira Kapoor and Tahira Kashyap all played important roles in making this movie, and the friendship between the two school children will drive this short film.

The 93rd Academy Awards will take place on April 25, 2021. The screening process has already begun.

Tahira and Ekta shared on Instagram that Bittu was selected in the Live Short Film category. Tahira writes, “I’m so excited that Bittu made it to the top 10 at the 93rd Academy Awards. This is our first initiative on the rise of Indian women.”

#bittu Among the Top 10 Awards at the 93rd Academy Awards! Can’t stay calm as this is our first project under indianwomenrising
This is very special @ k.devdube can you shine star Congratulations @shredevdubemaryelista, you are all rock stars.
Ekta Kapoor also shared her fans what other pics picked up on her flood, but she also said.

In addition to the Academy Awards, the film has also toured several film festivals abroad. In addition to “Bittu”, a list of 184 films has been published in various categories including Best Documentary, First Division, Best Visual Effects, and Best Animated Short Film.

Red, blue, purple …! It’s hard to find news without “color.” What is the “eating” news? Is this the last word? Or the real truth is the name “news”! Ran behind the “break” and prime time, the real press stuck to the wall. Money and eyes are tied to reporters. However, we do not believe in adding “color” to the fourth pillar of democracy. And you can bring it back from the brink of death. Isn’t the “fake” badge present on free news on the social wall? In fact, there is nothing in the world that is “free”. So, even a penny to offer can provide oxygen. Your small donation is also beneficial for independent journalism. stay tuned.❐

From being Yusuf Khan to Dilip Kumar