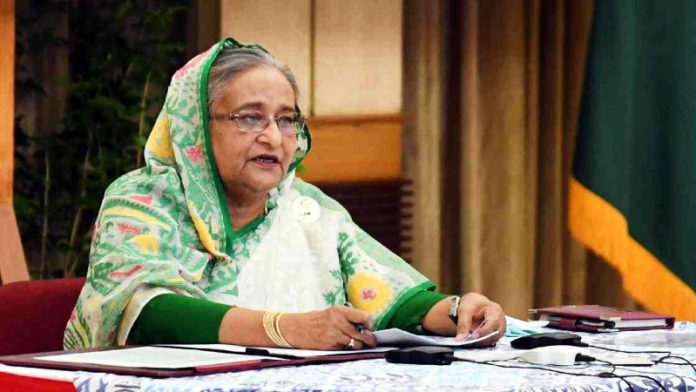 Stressing the importance of ensuring food security for all, Prime Minister Sheikh Hasina on Friday said the people of Bangladesh must not suffer from food scarcity as a fallout from the Covid-19 pandemic.

“In this Covid-19 pandemic, we faced a cyclone, floods and other [problems], we’ve to live this way. But we’ve to ensure food security so that each and every person gets food at his or her home,” she said.

The Prime Minister said this while speaking at an international seminar marking World Food Day. The Agriculture Ministry and Food and Agriculture Organisation (FAO) organised the programme at a city hotel. The Prime Minister attended it virtually from her official residence Ganobhaban.
Sheikh Hasina said the government gives immense importance to food production to ensure food security for all. “That’s why all have to go for food production in their lands, no matter whatever the size of those are,” she said.

When the Covid-19 hit the country, Hasina said, the government set its focus on food production and ensured the increased food production. “Because, there should be food security. As the entire world was in standstill, there’s a possibility of famine, but that must not affect Bangladesh…the people of Bangladesh must not suffer from food scarcity.”

She said the government has been providing various stimulus packages, worth Tk 112,633 crore, which is four percent of the GDP, from the very beginning of the pandemic.

She also mentioned that the agriculture sector alone got Tk 5,000 crore as a stimulus package for the pandemic period.

The Prime Minister said the government provided the stimulus packages for keeping the wheels of the economy moving and ensuring a good life for people during the pandemic. “We’ve been working relentlessly for that.”

She briefly described various initiatives taken by the government to turn Bangladesh into a self-sufficient country in food from a food deficit one.
Hasina said the dream of Father of the Nation Bangabandhu Sheikh Mujibur Rahman was to make the country free from hunger and poverty. “It was his dream to make the country as a developed and prosperous one, and we’re working to that end.”

A recorded speech of the Director General of Food and Agriculture Organisation (FAO) QU Dongyu was played at the programme.❐

Bangladesh comes into US focus on South Asia

Global security to be at stake if Rohingya crisis left unresolved