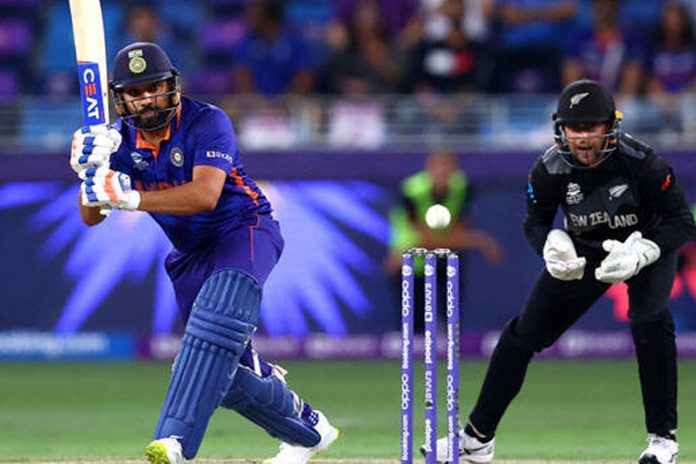 India’s superstar cricketers were pummelled on a second-straight Sunday as a disciplined New Zealand firmly pushed them towards the exit door with an easy eight-wicket victory in the ICC T20 World Cup here.

The defeat that puts India in serious danger of losing out on a semi-final berth also raises questions about outgoing T20 skipper Virat Kohli’s abject failure to win an ICC tournament in four attempts as captain.

While Kohli is set to step down from T20 captaincy, this defeat puts his ODI leadership future also in doubt.

If Pakistan match was a humiliating experience, the encounter against New Zealand was embarrassing to say the least as a meagre target of 111 was chased down by Daryl Mitchell (49 off 35 balls) and skipper Kane Williamson (33 not out off 31 balls) in only 14.

This was after India managed 110 for 7 in 20 overs in which they didn’t effectively score runs in nine of those overs (54 dot balls).
Worse, they were just able to hit a single boundary between overs 8 and 15 when two spinners were in operation.

The equation for India now gets muddled up and only Afghanistan’s victory over New Zealand can raise hopes of an outside chance to qualify for the semi-finals.

That too if they win all their remaining matches against Afghanistan, Namibia and Scotland.

But for all practical purposes, Kohli’s team, with its archaic version of T20 cricket, does not deserve a place in the last four.

New Zealand exposed the outfit’s inadequacies, mostly poor mindset and atrocious shot selection, something that was exploited to the hilt by Pakistan just a week back.

Post World T20, a lot of senior players may not be seen playing the shortest format as the one thing that this team swears by — playing fearless cricket — was nowhere to be seen.

It seemed like catching practice for the New Zealand team as most of the batters were out in the deep trying to force the pace and failing miserably.
There were 54 dot balls, which meant that India didn’t score any runs in nine of their 20 overs.

There were no demons in the track and India’s shoddy show with the willow was a consequence of poor team selection, not relying on form players and the failure to have any flexibility in the side, which lacked proper multi-skilled cricketers.

And true to ‘Murphy’s Law’ that “anything that can go wrong will go wrong at the worst possible time”, the team simply fell apart.

For example, Rohit Sharma and Virat Kohli both lost form at the same time.
The middle-order, which was a worry, remained so and Hardik Pandya as a batter completely flopped on big days.

He did bowl an over but one didn’t need to be an expert to understand that he is far from being bowling fit.

But the biggest of them all was how a country, whose players are considered masters of spin bowling, looked clueless against the slow stuff.

Just like the Pakistan game, the spinners — left-arm orthodox Mitchell Santner (4-0-15-0) and leg-spinner Ish Sodhi (4-0-17-2) — caught India by the scruff of their necks, giving away only 32 runs in eight overs.

India tweaked their batting order but it hardly paid any dividends as there was no firepower in the power play and 40 for 3 in eight overs could have only spelt doom.

Ishan Kishan tried to whip one off Trent Boult (4-0-20-3) but was caught at deep square leg boundary by Santner.

KL Rahul (18) hit a couple of boundaries but not for a moment during his 16-ball stay at the crease, did he look confident enough to take on the bowlers.

Tim Southee (4-0-26-1), at the stroke of power play, exposed Rahul’s problems against short ball as the pull-shot was collected by Santner, who got his second of the night.

Rohit Sharma (14) was gone when Ish Sodhi pitched one slightly on the shorter length, he tried to pull it in front of square but was caught by a tumbling Martin Guptill, who judged it well enough to make it 40 for three.

Kohli, who of late, is playing the role of an anchor, never got going and during his laboured presence at the wicket, only increased the pressure on the team.

Sodhi tossed one conventional leg-break outside the off-stump and the Indian captain, trying to hit against the turn, could only find Boult at the long-on boundary.

Pandya (23 off 24 balls), in his current form, is not a threat for any team and Rishabh Pant, after being kept quiet by the two Black Caps spinners, got one fast and straight from Milne, which breached his defence.

Once Pant was gone, any chance of winning the game was also thrown out of the Dubai International Stadium, and deep into the Arabian Sea.

Banned Kenya and Zimbabwe to be included in 2023 AFCON draw