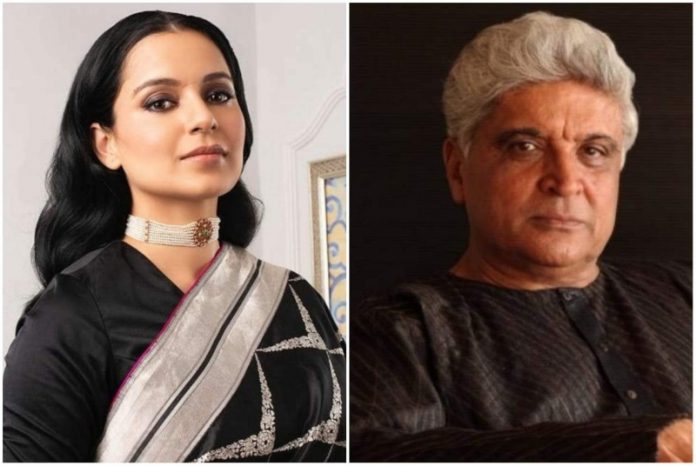 Bollywood lyricist Javed Akhtar on Tuesday filed a criminal complaint against actor Kangana Ranaut in a local court for allegedly making defamatory and baseless comments against him in television interviews.

Akhtar filed the complaint before the Andheri Metropolitan Magistrate, seeking action against Ranaut under the relevant provisions of the IPC for defamation.

As per the complaint, Ranuat had recently made certain baseless comments on Akhtar which has caused damage to the reputation of the veteran poet-lyricist. It added that Ranaut dragged Akhtar’s name while referring to a “coterie” existing in Bollywood following the death of actor Sushant Singh Rajput in June.

She had also claimed that Akhtar had threatened her to not speak about her alleged relationship with actor Hrithik Roshan, it said. All these statements made by Ranaut have garnered views in lakhs and thus tarnished Akhtar’s reputation, the complaint said.

Earlier, reacting to Kangana’s several controversial statements, Shabana Azmi had said in an interview to Mumbai Mirror, “Kangana has started believing in her own myth. She says she taught feminism to the film industry, she taught it nationalism. I’m glad she spelled that out because nobody else had noticed! I think she fears the day when she will no longer be in the headlines and so has to keep making outrageous statements to stay in the news. Poor girl, why doesn’t she just do what she is best at, which is acting.”❐

Single woman/lone warrior fighting against Bullywood suicide gang, drug mafia, fascist government, tukde gang all at once, I may have chosen a difficult life but it’s an honour to awaken my nation to all the threats we face against our unity and integrity. https://t.co/7MIuDLrrBb