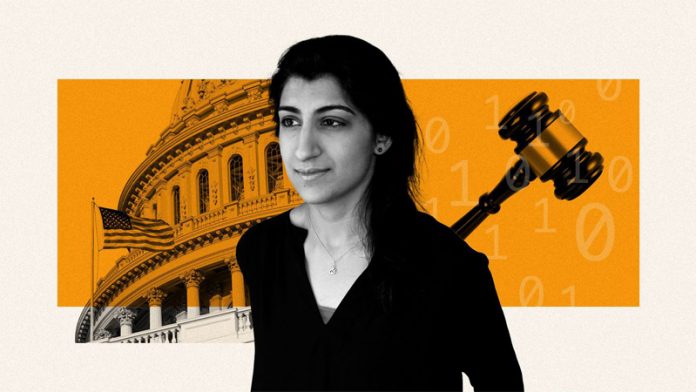 President Joe Biden on Tuesday named Lina Khan as the next chair of the Federal Trade Commission, just hours after she won Senate confirmation for a vacancy on the commission.

Khan is a major and outspoken critic of big tech conglomerates, and her confirmation in a 69-28 vote earlier in the day was a reflection of the bipartisanship when it comes to concerns that Google, Facebook, Amazon and Apple have become too large.

Sen. Amy Klobuchar (D-MN) announced the appointment of Khan to lead the FTC at a Senate hearing, and a source confirmed the choice to Deadline.

Khan, 32, an associate professor of law at Columbia Law School, wrote Amazon’s Antitrust Paradox for the Yale Law Journal, in which she argued that the current antitrust framework, rooted in the consumer welfare standard, has been unable to curb the competitive harms from online platforms, in areas such as predatory pricing and exploitation of information and data.

The FTC already is investigating Amazon, and filed an antitrust lawsuit against Facebook last year.

Klobuchar, who leads the Senate antitrust subcommittee, has introduced a series of steps to try to rein in the power of tech platforms. Her counterpart in the House, Rep. David Cicilline (R-RI) last week introduced a series of antitrust bills focused on tech giants, and he has garnered GOP support including co-sponsor Rep. Ken Buck (R-CO). Khan helped with a House Judiciary Committee report released last fall that outlined where Apple, Facebook, Amazon and Google had engaged in anticompetitive behavior.

“I’m so grateful to the Senate for my confirmation,” Khan wrote on Twitter. “Congress created the FTC to safeguard fair competition and protect consumers, workers, and honest businesses from unfair & deceptive practices. I look forward to upholding this mission with vigor and serving the American public.” Her term runs through 2024.

Biden has not yet nominated another key figure in overseeing market competition: the antitrust chief at the Department of Justice. He also has to fill a vacancy on the FCC, a move that would give Democrats a 3-2 majority.

Charles Rivkin, chairman of the MPA, praised Khan’s confirmation in a statement, noting the role that the FTC plays in combating online content piracy.

“We look forward to working with Commissioner Khan and the entire FTC to protect content creators and our audiences, educate consumers about the harms of stealing the work of America’s film and television creators, and hold accountable those actors in the online ecosystem who turn a blind eye to online crime,” he said.