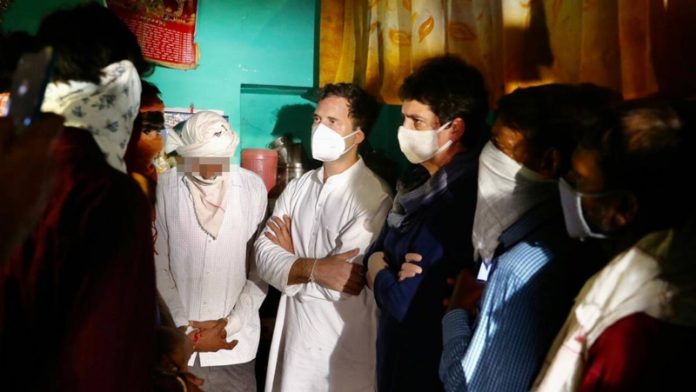 Launching a scathing attack on the Uttar Pradesh chief minister Yogi Adityanath over the Hathras case, he said in a twitter: ‘The shameful truth is many Indians don’t consider Dalits, Muslims and Tribals to be humans,’ report Indian newspapers.

Rahul Gandhi has been active in supporting the family of the 20-year-old girl who was allegedly gang-raped and murdered by a group of upper-caste men.

Last week, in an attack over Prime Minister Natendra Modi, he had said that it was ‘no big deal’ that he was pushed to the ground by the Uttar Pradesh police when he and his sister Priyanka Gandhi were on their way to Hathras to meet the family of 20-year-old Dalit girl who was allegedly gang raped and murdered by a group of upper-caste men.

In his press conference, Rahul Gandhi took a dig at Modi government and said, “The entire country is being pushed to corner and being beaten up. What’s the big deal if I was pushed. It’s our job to protect the country, we have to stand with the farmers. The government is such that if we stand against them, we will be pushed. Dhakka kha lenge, lathi kha lenge.”

He had also spoken about the UP administration and the handling of the case and his purpose for visiting the victim’s family.

He had said, “People who have daughters will understand this. Do you have a daughter? If not, you will understand the murder aspect of the (Hathras) case. Imagine, someone kills your son and locks you up in your house. The district magistrate threatens you and tells you to not open your mouth. What if they tell you: ‘Rahul Gandhi will go but UP government will be here’. That’s why I went there so they don’t feel alone. I am here for all the women who have faced sexual violence.”

On October 1, Congress leaders Rahul Gandhi and Priyanka Gandhi were arrested by the police and taken to the police station while they were on their way to Hathras to meet the family of gang rape victim.

Rahul Gandhi alleged that he was pushed to the ground and lathi-charged, when he and his sister Priyanka Gandhi were marching towards Hathras after their convoy was stopped at the highway between Delhi and Uttar Pradesh.❐