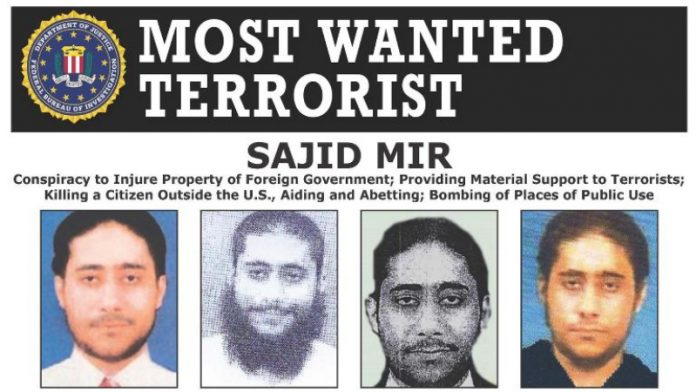 Sajid Mir, the main accused who planned and executed the terror attacks in India’s Mumbai city in 2008, continues to roam freely even after 12 years with the help of Pakistan despite being on the wanted list of the Federal Bureau of Investigation (FBI).

“Despite his mug shots being available, none of the intelligence agencies have been able to locate him. As is there won’t, the Pakistanis feign complete ignorance about Sajid Mir, a standard Pakistani response when confronted with an inconvenient demand,” Jihad Watch said in its report in October.

Mir is responsible for attacks in about half a dozen other countries – the US, Australia, France, Denmark and the UK. The US State Department has offered a reward of USD 5 million for information leading to the arrest and conviction of Sajid Mir.
According to political analyst Shuja Nawaz, every time US officials presented evidence of Taliban and Haqqani Network sanctuaries inside Pakistan, they were met with a “blank stare”.

“Sajid Mir remains a shadowy figure about whom not much is known. Even his antecedents are fuzzy. Some reports claim that he joined the LeT at the young age of 16 and then rose up the ranks. But other reports, which might be circumstantially more credible, claim that he is a Pakistan Army/ISI member/officer who has been working very closely with the LeT,” the report further stated.

A US law enforcement official had once said that “Sajid Mir is too powerful and too well connected for them to go after. We need the Pakistanis to go after the Taliban and Al Qaeda.”

According to a report by EU reporter, international pressure is again pushing Pakistan to take action against terrorist groups and stop providing safe haven to them.

“…Some of those responsible for the terrible attacks are still at liberty and thereby free to plot a similar atrocity. With the anniversary of the Mumbai attacks falling today (26 November), international pressure is again pushing Pakistan to take more action against militant groups and their leaders,” it said.

“As evidence, they point to the decision by a global “dirty money” watchdog to keep Pakistan on its “grey list” for failing to meet international anti-terrorism financing norms,” it added.
On November 26, 2008, ten terrorists trained by the Pakistan-based terrorist organisation Lashkar-e-Tayyiba (LeT) carried out a series of coordinated attacks against multiple targets in Mumbai including the Taj Mahal Hotel, the Oberoi Hotel, the Leopold Cafe, the Nariman (Chabad) House, and the Chhatrapati Shivaji Terminus train station, killing 166 people.

In these attacks, nine terrorists were killed and the lone survivor, Ajmal Amir Kasab, was caught and was sentenced to death at Yerwada Central Jail in Pune in 2012. On November 11, 2012, Kasab was hanged in Yerawada Jail in Pune.

Pakistani authorities continue to deny culpability and are yet to take action on the multiple dossiers shared by India.❐