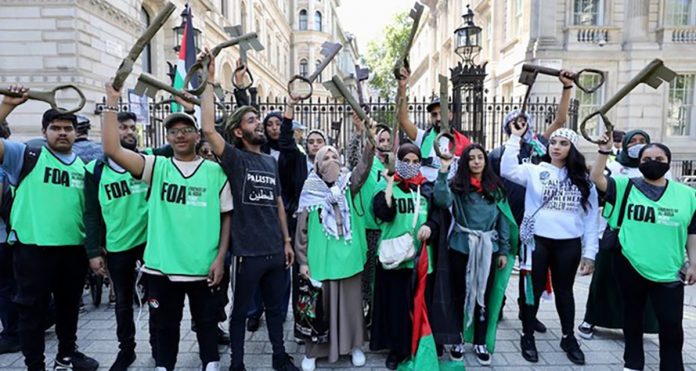 LONDON: Around 15,000 pro-Palestinian demonstrators gathered in London on Saturday to protest the killing of journalist Shireen Abu Akleh earlier this week in the West Bank.
“In response to Shireen Abu Akleh’s murder by Israeli sniper, protesters today held 55 paper press jackets outside the BBC headquarters in London to represent the 55 journalists killed by Israel since 2000,” the organizers said.

The veteran Palestinian-American reporter who had been covering the Middle East conflict for over 25 years, was shot in the head on Wednesday morning during an Israeli military raid in the West Bank town of Jenin.

74 keys held high to represent each year of the Nakba (catastrophe) when Palestinians were forcibly expelled from their homeland for the creation of Israel. Palestinians hold on to the keys of their homes waiting for the right of return. #Nakba74 #FreePalestine #Palestine pic.twitter.com/VFdEyjDItM

Her death and following conduct of Israeli police at her funeral on Friday has sparked widespread condemnation, with calls for investigations into the incidents.

“This was just one of several powerful visual representations of the ongoing Nakba in today’s march for Palestine in London, attended by 15,000 people,” the UK-based Friends of Al-Aqsa said.
“Israel’s targeting of Shireen and the disrespect shown by Israeli Occupation Forces at Shireen’s funeral yesterday is disgusting” said Shamiul Joarder, head of public Affairs at FOA “We’re marching from the BBC to Downing Street today to call for sanctions on Israel for 74 years of these heinous war crimes”.

Protesters also held 74 keys to commemorate 74 years of Israel’s ongoing illegal occupation and apartheid in Palestine, known as the Nakba or catastrophe, when hundreds of thousands of Palestinians were forced to leave their homes 1948 “to make way for the state of Israel and many retain their keys to this day,” FOA said.

Protesters also held BBC headline posters highlighting the broadcasting company’s bias and problematic language when reporting on Israel’s illegal occupation of Palestine, as well as hand tracing in support of the FOA’s #HandsOffAlAqsa campaign, which demands that Israel stops its attacks on Palestinian worshippers at Al-Aqsa.

Individuals also wrote messages of condolences for Shireen in a memorial outside the BBC.