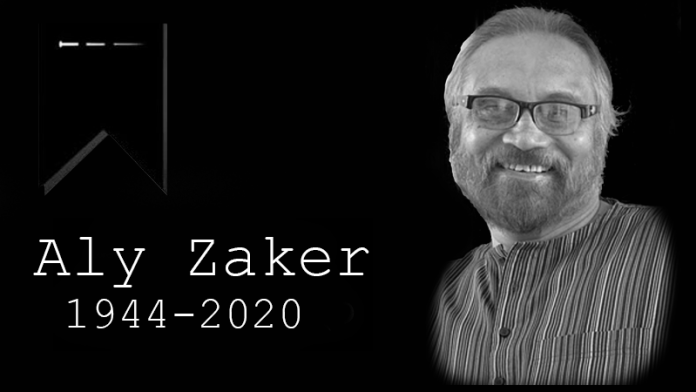 Aly Zaker, a towering figure in theatre, television and film arena in Bangladesh, has died in hospital care after a four-year battle with cancer. He was 76.

The legendary actor passed away at United Hospital in Dhaka at 6:40 am Friday, his advertising company Asiatic 3Sixty said in a brief statement. Aly tested positive for the COVID-19 illness two days ago, his son Iresh Zaker wrote on Facebook.

Aly left an indelible mark on audiences with memorable performances on stage and television over a span of more than 20 years.

President Abdul Hamid and Prime Minister Sheikh Hasina led the tributes for the acclaimed thespian in the wake of his demise.

In a condolence message, Hamid said, “Aly Zaker was a shining star in the country’s cultural arena. With his death, the country has lost a great actor and cultural figure.”

He will be “remembered for his contribution to the Great Liberation War and the country’s art and cultural arena”, said Hasina.

State Minister for Cultural Affairs KM Khalid also expressed grief over the death of the actor and said, “Through his acting and creative endeavours, he will live forever in the hearts of audiences in this country.”

Aly’s mortal remains was taken to the Liberation War Museum premises around 11 am for people to pay their respects to the revered artist, according to the museum’s trustee and former cultural affairs minister Asaduzzaman Noor. He was later laid to rest at the capital’s Banani Graveyard following a Namaz-e-Janaza or funeral prayers after the Asr prayers at the graveyard mosque, according to the Asiatic 3Sixty.

The cancer-stricken actor was hospitalised two weeks ago after suffering a heart attack amid the coronavirus pandemic.

After a week of treatment at the Bangladesh Specialised Hospital in the capital, Aly made a recovery and returned home earlier in the week. But his health subsequently took a downturn and he was taken to United Hospital on Thursday.

Aly’s body will not be taken to the Central Shaheed Minar for fans and well-wishers to pay homage as he contracted the coronavirus in the final stages of his treatment, according to Ghulam Quddus, president of the Sammilita Sangskritik Jote.

During his childhood, Aly moved from one city to another due to his father Muhammad Taher’s job in the civil service. The family finally settled in Dhaka after his father became the secretary of the provincial government.

Aly completed his schooling from St Gregory’s High School and Notre Dame College before being admitted to the Department of Social Welfare of Dhaka University. He later became entangled with drama as well as student politics during his time in university.

He was involved with the Chhatra Union and remained in the pro-Moscow camp led by Matia Chowdhury after the union split into two factions.

He served as a freedom fighter during the 1971 Liberation War. He was one of the trustees of the Liberation War Museum in Dhaka.❐